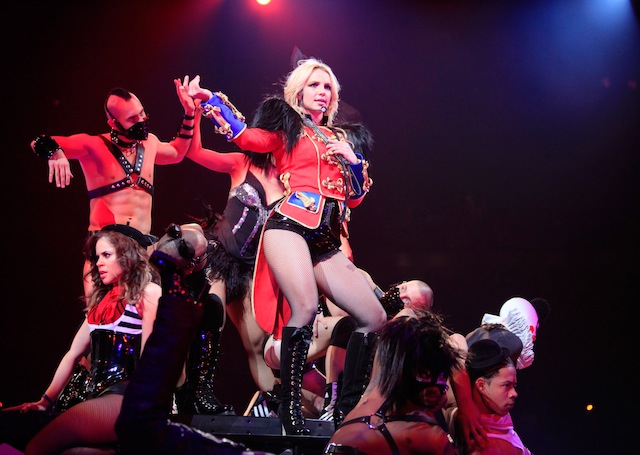 No, not the Britney Spears! Anything but that! (Photo by EI-Jeremy Cowart/Getty Images for Jive Records)

What's the best defense against pirates? Turns out, it's "Oops! I Did It Again."

That and another Britney Spears hit, "Baby One More Time," is also being used by the navy to keep Somali pirates at bay, merchant navy officer Rachel Owens tells Metro UK.

If only Captain Phillips had thought of that! (But then Tom Hanks would be out one Oscar-worthy movie role.)

Second Officer Owens, who works on supertankers off the east coast of Africa, said: "Her songs were chosen by the security team because they thought the pirates would hate them most.These guys can’t stand Western culture or music, making Britney’s hits perfect."

Owens said the ship’s speakers can be aimed just at the pirates so as not to disturb the crew, who also might balk at non-stop Brit Brit.

"It’s so effective the ship’s security rarely needs to resort to firing guns," said Owens. "As soon as the pirates get a blast of Britney, they move on as quickly as they can."

We imagine Rihanna, Lady Gaga or Keisha might also do the trick, but if Britney works, why change it?

Steven Jones, of the Security Association for the Maritime Industry, said: "Pirates will go to any lengths to avoid or try to overcome the music." He added, "I’d imagine using Justin Bieber would be against the Geneva Convention."

It's not the first time pop music has been used as a weapon. At Guantanamo Bay, Metallica's "Enter Sandman" played at extremely loud levels was considered "torture lite," a usage that got the blessing of the band's frontman, James Hetfield. As he told The Guardian, "We've been punishing our parents, our wives, our loved ones with this music for ever. Why should the Iraqis be any different?"

The Branch Davidians at Waco were blasted with retro tunes like "Sing-Along With Mitch Miller" Christmas carols, Andy Williams album and "These Boots Are Made for Walking" by Nancy Sinatra.

U.S. malls routinely crank up the classical tunes to drive off loitering teens or assault them with Barry Manilow.

When I worked at a record store years ago, nothing was as effective at clearing the room as polka. If Britney starts wearing off, I recommend trying the old oom pah pah.