Dr. Conrad Murray Is a Free Man, Goes to In-N-Out 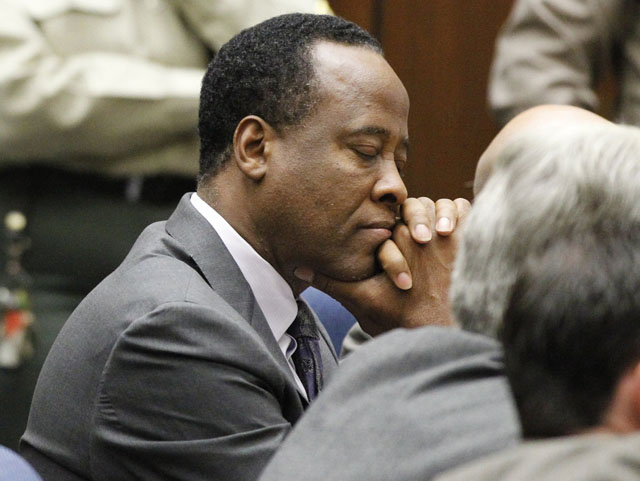 Dr. Conrad Murray closes his eyes after he was sentenced for the involuntary manslaughter of singer Michael Jackson at the Los Angeles Superior Court on November 29, 2011 in Los Angeles, California. (Photo by Mario Anzuoni-Pool/Getty Images)

At 12:01 a.m., Dr. Conrad Murray became a free man after serving a maximum four-year sentence for involuntary manslaughter in the death of Michael Jackson.

Murray was sentenced in November 2011 for being the person to inject the fatal dose of the anesthetic propofol into the 50-year old Jackson. Murray maintained his innocence saying that Jackson injected the fatal dose himself, however prosecutors said that propofol should only be injected in a hospital setting.

This was also at the heart of the Jackson family's lawsuit against Anschutz Entertainment Group. A jury earlier this month cleared AEG of any liability in Jackson's death.

The L.A. Times reported that a group of diehard Jackson fans waiting outside of the jail were waiting to heckle the 60-year old Murray upon his release.

Laura Sherwood, 27, said she moved from Phoenix to follow Murray's trial. She said she had hoped that Murray would show remorse.

"I just want to know why he won't admit and take responsibility for what he did," she said.

Apparently there was also a lady wearing a t-shirt that read "Thriller Killer" in red lettering.

Murray was able to elude the throng, although exactly how the L.A. County Sheriff's Department won't say. All spokesman Steve Whitmore told reporters was that he was released to his representatives, the Times reported.

Now, if you were to get out of jail after about two years, where is your first stop? Of course it's In-N-Out! And, of course, TMZ has the photos of Murray enjoying the grub.

No word on what Murray will do now especially since he had his medical license revoked.