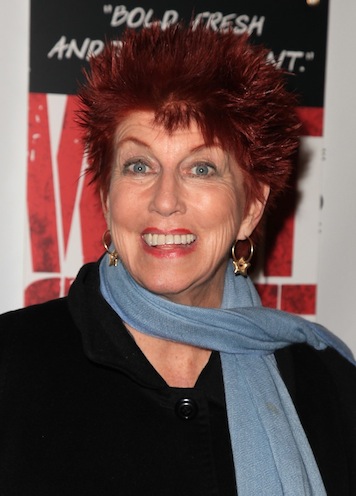 Marcia Wallace at the opening night of 'West Side Story' at the Pantages Theatre on December 1, 2010 in Hollywood. (Photo by Angela Weiss/Getty Images for the Pantages Theatre)
Sad to report that Marcia Wallace, best-known as the Emmy-winning voice of Edna Krabappel on The Simpsons and as wise-cracking receptionist Carol on The Bob Newhart Show, died last night in Los Angeles.

The actress would have turned 71 on November 1.

"She passed at 9 p.m. last night due to complications from breast cancer of which she was a long and proud survivor and advocate for women and healing," Wallace's close friend Cathryn Michon, who co-wrote and directed the actress's final movie, Muffin Top, told Deadline. "Ironically it was during breast cancer awareness month, during which she was always a funny ray of hope for so many. I'm devastated."

Simpsons producer Al Jean issued a statement today saying, "I was tremendously saddened to learn this morning of the passing of the brilliant and gracious Marcia Wallace. She was beloved by all at The Simpsons and we intend to retire her irreplaceable character. Earlier we had discussed a potential storyline in which a character passed away. This was not Marcia’s Edna Krabappel. Marcia's passing is unrelated and again, a terrible loss for all who had the pleasure of knowing her."

"Cheers to the hilarious, kind, fab Marcia Wallace, who has taken her leave from us, Wallace," Simpsons co-star Yeardley Smith, the voice of Lisa Simpson, tweeted. “Heaven is now a much funnier place because of you."

According to Yahoo, Wallace was diagnosed with breast cancer in 1985. In 2007, she received the Gilda Radner Courage Award for her efforts to educate others on the disease.

She published her autobiography in 2004: Don't Look Back, We're Not Going That Way, , subtitled, How I Overcame a Rocky Childhood, a Nervous Breakdown, Breast Cancer, Widowhood, Fat, Fire & Menopausal Motherhood and Still Managed to Count My Lucky Chickens.

Condolences to her family, her fans and Ned Flanders, her unlikely partner on The Simpsons.