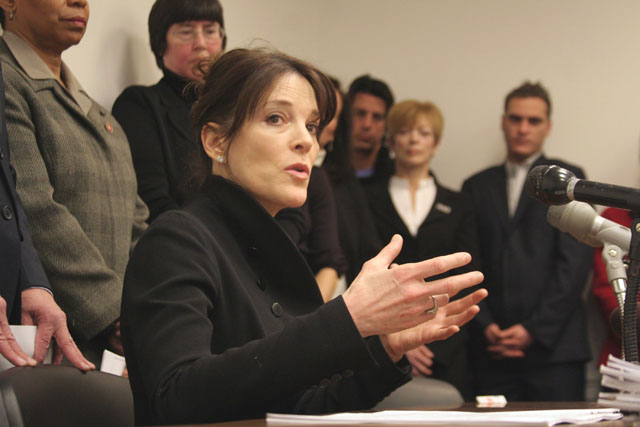 Peace Alliance founder Marianne Williamson speaks at the news conference to reintroduce the Department of Peace And Nonviolence Bill on February 06, 2007 in Washington, DC. (Photo by Nancy Ostertag/Getty Images)

Williamson will appear tonight at the Mysterious Galaxy Bookstore in Redondo Beach from 7:30 p.m. to 8:30 p.m. to discuss her campaign. Williamson announced her candidacy at the Saban Theater in Beverly Hills on Sunday.

"We have developed over the last few decades a system of legalized corruption in the United States in which those with money are accorded much more political influence than those who are without,'' Williamson said in the speech. "And that is not democracy.''

Williamson, an author of 10 books about spirituality, six of which were New York Times best-sellers, founded Project Angel Food in 1990 that provided meals to AIDS patients who could not leave their homes. A long time peace activist, Williamson does not find herself at odds with Waxman. She conceded that the two of them agree with one another on the issues.

"Mr. Waxman has been a good congressman for 38 years and I believe he deserves appreciation and respect," Williamson told City News Service. "But a new conversation is required now and the political status quo — even the best of it — cannot provide that."

"While some think it would make more sense for her to challenge a Republican and help us regain control of the House, I respect her right to run,'' Waxman told CNS.

Below is an interview Williamson did with RuPaul in his series "RuPaul Drives..." just before Williamson announced her candidacy. Williamson talks a lot about her platform and politics in the clip.