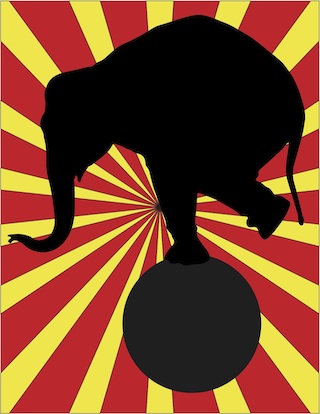 The council voted unanimously to ban circuses from using bullhooks, a hook used to train elephants and goad them into performing during a show. The traditional circuses that roll through town say that without bullhooks, elephants can't perform—and without elephants there isn't much of a circus.

The bullhook ban hasn't gone into effect just yet, but the city attorney will be working out the nitty gritty details of the ban, which would also bar the use of baseball bats, pitchforks, ax handles and other goads. The rule will be phased in over the course of three years, according to City News Service.

Ringling Bros. released a statement calling the ban "extreme": "Today's decision was unsupported by any evidence or proof of elephant abuse in Los Angeles, and more importantly, it did not implement any measures that would improve the welfare of animals. Instead, it will deprive families of the right to take their children to see live animals at the circus."

The ban has a lot of supporters, including PETA, Kristen Bell, Sarah Silverman, Ke$ha and the Los Angeles Times editorial board. A few counties in Florida and Georgia have banned bullhooks, as have the zoos including Los Angeles' own. PETA is trying to get other cities and counties to ban bullhooks and describes them this way:


Make no mistake about it: Bullhooks are weapons. Trainers sink the sharp hooks deep into elephants' ears, mouths, and other sensitive parts where their skin is paper-thin and swing the rods like baseball bats against elephants' wrists and ankles, where there's little tissue to protect their bones from agonizing blows. When the lights come up under the big top, the trainers, who have spent countless hours "breaking" and abusing elephants behind the scenes where audiences can't see, threaten the frightened animals with bullhooks until they scramble onto tiny stools or perform other tricks to escape the threat of pain.

City councilman Paul Koretz proposed the ban after investigating the issue with an "open mind" and says he now considers a bullhook a "dangerous weapon." He says his issue isn't with circuses themselves, but the way bullhooks affect elephants: "We know so much more now about elephants and their intelligence, sensitivity and emotional natures. We know they suffer not only physically, but [psychologically]."