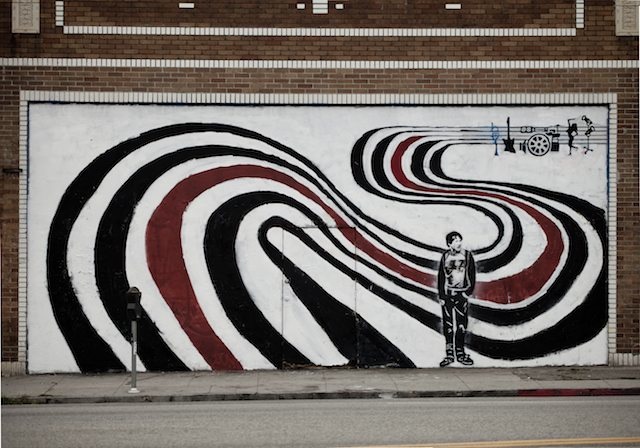 In the past 10 years since Elliott Smith died, the Silver Lake mural that became the backdrop of his album "Figure 8" has served as a place for the fans to pay tribute to the singer-songwriter who lived in Echo Park.

Today the photographer who shot that iconic album cover describes how her friendship with Smith developed and why she picked that wall. Autumn de Wilde explains to The Hollywood Reporter:


I grew up in the Silver Lake area and went to junior high down the street from the Sound Solutions wall. I came up with the idea of using the weird murals on Sunset that I'd been obsessing over since I was little. It was the ugliest mural I'd ever seen, and eventually the most beautiful because I looked at it almost everyday.
So I took Polaroids of a bunch of murals up and down Sunset Boulevard, and I'd always loved that photo of Nick Drake leaning against a brick wall looking down the street while a blurred picture of a girl runs by. I said at a meeting with Elliott, "What if you're unaware of the color around you, and you're just walking through or leaning against the wall, and you don't realize how electric it is?" And he was, like, "I love that idea."
He was really into it being like a journey through this part of L.A. He was really falling in love with L.A. at that time. Because he came from Texas and then Portland, which at the time was famous for hating L.A. … the punk side of him decided to love L.A.

We couldn't find the exact picture of Nick Drake that de Wilde is referencing (or perhaps she got it wrong) but here's a photo of a man in full sprint while Drake looks off into the distance for the album "Five Leaves Left" next to Smith's "Figure 8":

A photo from Nick Drake's "Five Leaves Left" via Music Geek. The album cover of Elliot Smith's "Figure 8," which was shot by Autumn de Wilde.

The Elliott Smith Wall (as it's called) is constantly being tagged and so it's always being repainted, sometimes with Smith's image and sometimes his lyrics. de Wilde says this means it's a little weird driving by and seeing how it's changed:


It's a little weird, mostly because it's repainted wrong. And it's also something that was mine until I made it very public. But when someone I really respect sends me a photo of themselves in front of it, then I really feel lucky that some strange childhood memory of mine became important to his fans. I'm glad his fans have a place to celebrate him, but it's a weird mix for me.