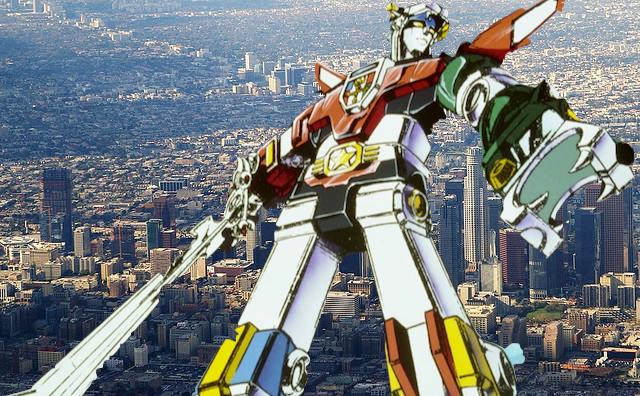 There's no shame in being an Los Angeles transplant, and we've decided to tackle this issue head-on in our inaugural "Ask A Native Angeleno" column from a resident worried that maybe life would be better as a transplant on the East Coast. If you have your own burning question for a Native Angeleno, you can e-mail us using the subject line "Ask A Native Angeleno." It's fine if you want to be anonymous, just let us know which neighborhood you live in.

I've lived here for seven years, and I love it! The weather is great and there are so many fun and creative people. But some of my friends are always complaining, and saying that New York is so much better. Are they right? What should I tell them?

You are not alone. Many Angelenos (even some natives) feel a sense of coastal inferiority when it comes to New York. So many subway lines, so many iconic buildings. They have like 12 newspapers and people actually read them. Hell, even their bike lanes are better then ours!

The truth is, New York is better than L.A.—at being New York.

Los Angeles has many obvious attributes when compared to the Big Apple - perfect weather, relative affordability, access to delicious Mexican food, and so forth. And granted, the two have much in common. Both are big, coastal cities that attract a certain class of, ahem, creative / ambitious / social climbing / attention-starved people. 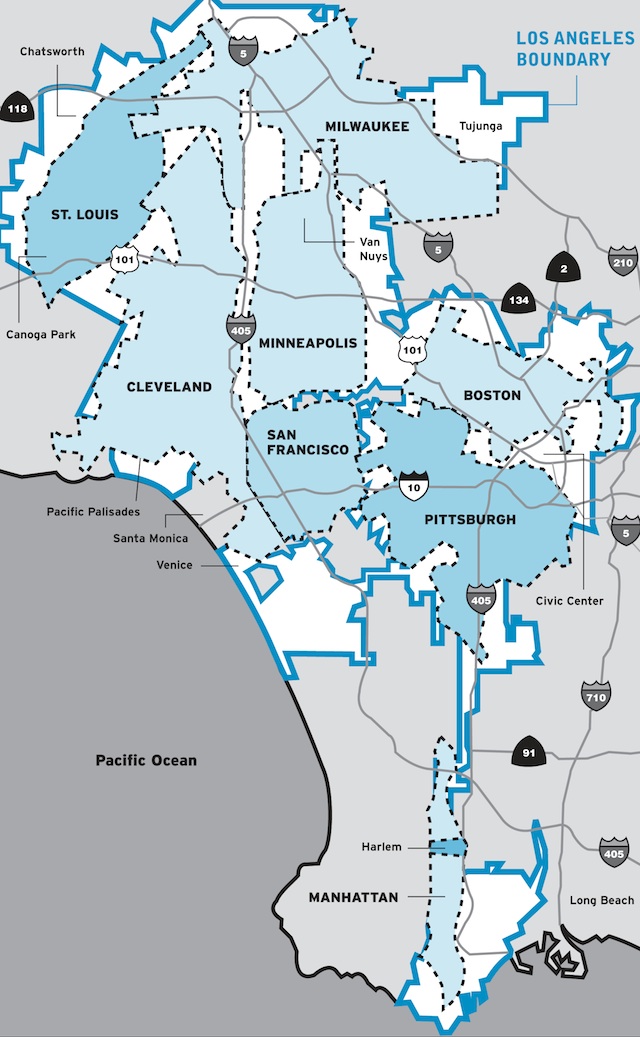 Source
But here’s the thing: L.A. is not a city. It’s a big sprawling thing, a massive beast. It’s the Voltron of cities. This map is great illustration of what I mean. Look how you can fit seven major American cities inside Los Angeles, like a gigantic cement Tupperware container - Boston rests comfortably inside the tri-hipster area, St. Louis nestles up in the West Valley, and girlishly skinny Manhattan slides into Harbor Gateway, of all places.

And so L.A. contains multitudes. The experience of living in Venice Beach has very little to do with the experience of living in Echo Park, or Studio City, or Watts, or San Pedro. And for all the cultural attention that fortune seeking out-of-towners get, most Angelenos are, like me, natives and (unlike me) working class. There’s a lot going on here, too much for the rest of the world to take notice of.

The city must be either loved on its own merits or tossed aside like an unwanted fruit. I came across this wonderful quote by Christopher Isherwood about L.A. from 1939: “The whole place like a world's fair, quite new and already partly in ruins.” Amazing how true that still is today. If you love Los Angeles, you probably love the way the tree roots push up from the ground and cause the sidewalks to split apart; you probably love that we paved over the sides of our river to try and control it, and now are obsessed with turning it back into some semblance of nature. That tension between man and nature, old and new, plays out every day, on every street corner.

In New York nature lost a long time ago.

One needs only to compare our two parks: they have Central Park, for my money the single greatest thing or piece of art ever created in America. But it’s so New York, so planned, so curated. Its architect, Frederick Law Olmsted, even had detailed plans for what colors the boats would be painted (his plan for an equally extravagant park in Los Angeles was rejected as being too expensive).

Then take our park, Griffith, named after the wife-murdering (ok, he only tried to kill her) millionaire whom the city despised. It’s five times bigger than Central Park, and it’s a hulking, sprawling mess of fire-scarred trees and dirt paths. Griffith is full of surprises, from the majestic to the absurd: an observatory, an abandoned zoo, a great little coffee shop, a carousel. Oh and they ran a freeway through it.

Unlike San Diego. That place is a shit hole!