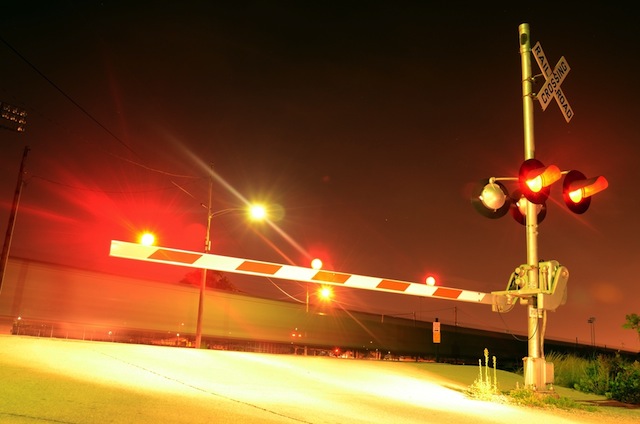 Three men are lucky to have escaped an accident at a railroad crossing that left the BMW they were in totaled and one passenger with a broken arm.

The driver crashed his convertible at a railroad crossing in Montebello early this morning, where the disabled car was then hit by a Union Pacific freight train that couldn't stop in time.

One of the passengers suffered a broken arm, police told City News Service, and the driver was arrested on suspicion of drunk driving.

The accident occurred just before 4 a.m., with the car ending up on the tracks next to the intersection of Montebello and Olympic boulevards, where it was hit by a train. Sgt. Jennifer Garcia of the Montebello Police Department told CNS.

The BMW driver and a second passenger were not injured, she said. The men's names and ages were not released, although Garica said they were all about the same age. (We're guessing 20s or younger.)

A Union Pacific spokesman, Aaron Hunt, told CNS, "It typically takes our trains more than a mile to stop, and in this case the train was unable to stop before hitting the vehicle.''