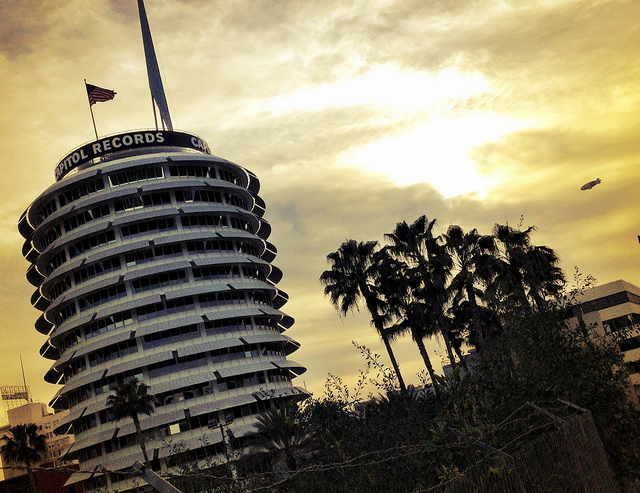 The Capitol Records tower in Hollywood (Photo by Hank Chinaski L.A. via the LAist Featured Photos pool on Flickr)

Some disturbing details for Great ShakeOut day: several famous buildings are at risk in the next big quake, including the Capitol Records tower, the Hollywood Plaza apartments and the W Hotel in Westwood, an analysis by the LA Times concludes.

They're just a few of the 1,000 older concrete buildings in the city that are vulnerable because, without enough steel reinforcing beams, they will sway sideways in a major earthquake. The Times estimates that at least 50 of these buildings would not survive a major quake.

The Times writes that Los Angeles officials have known about the dangers posed by unreinforced concrete structures for more than 40 years but have failed to force owners to make their properties safer and have also refused to make a list of at-risk buildings.

University scientists went ahead and compiled the first comprehensive inventory of potentially dangerous concrete buildings in Los Angeles, says the Times. They're not going to make it public, but they will make it available to the city, who, so far, has not asked for a copy.

Times reporters verified the list by poring over records and walking through buildings to determine which are made of concrete, a difficult tasks since some city records didn't specify the construction materials used.

Of 68 older buildings that were made of concrete, according to public records, only 7 had been retrofitted.

Out of the 14 concrete buildings around Hollywood and Vine, only 3 have been retrofitted, the Times determined, apparently not including the iconic Capitol Records tower.

As opponents of the Hollywood Millennium project have been vocally insisting and the state geologist agrees, a fault runs through the area, making the danger more than hypothetical.

"Just like accidents, fires, we don't know when the big earthquake will come," Yolanda Elizon, a maid for low-income elderly residents at the 10-story Hollywood Plaza Apartments told the Times. "I believe if the earthquake comes, only God can save us."