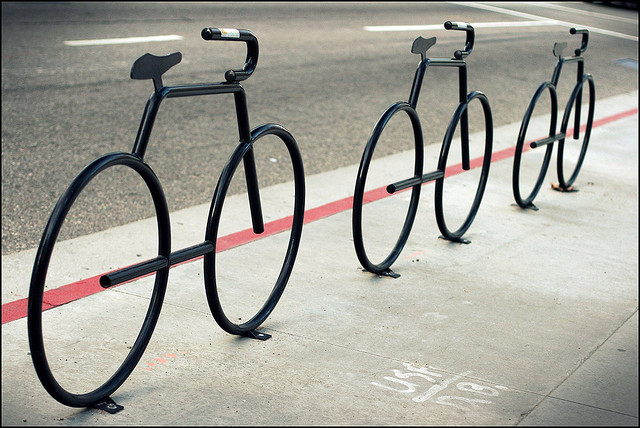 Bike rack (Photo by via the LAist Featured Photos pool)

Los Angeles is taking more steps toward being a bicycle-friendly city. In the past few months, we have had a chance to see how the new ordinance requiring more places for bikes to park is making a difference in new developments across the city. The new ordinance, which the city passed in January, requires developers to build bicycle parking spots for most residential and commercial buildings in Los Angeles. In some cases, the numbers of new parking spaces for bikes—and the shrinking number of car spots—is astounding.

Sonny Astani, a developer in L.A., told the Los Angeles Business Journal (subscription only) that because of the new law, he was able to save more than $3 million by being able to cut down 110 of the legally-required car parking spaces. He ended up building 744 bike parking spaces along with his 595 car parking spaces.

Developers say that they're only too happy to add more bike spaces because it saves them from having to create pricey and more space-intensive parking spots for cars. They can cut down on car parking spaces by 10 percent to 30 percent. The Los Angeles Business Journal reports:


With the cost of underground parking running to about $40,000 a space, those savings can be significant.

"In general, subterranean parking in an urban infill development is a costly situation," said Hamid Behdad, president of consulting firm Central City Development Group. "The deeper in the ground you go, the more expensive it gets. But, ultimately, the market dictates what the requirements are."

It's not just affecting completely new developments. We'll even start seeing changes in historic landmarks like the Hollywood Palladium. Their developers plan on adding two more structures to it, and in doing so, plan on building 820 bicycle stalls pursuant to the ordinance, as referenced in their Initial Study report.

However, there are some naysayers. Some believe this law helps developers undermine the car parking requirements. “One bike space per unit is very stupid—they’re never going to be used, especially in Los Angeles," Developer Barry Shy told the Los Angeles Business Journal. "Maybe 20 percent of tenants will have bikes."

A majority of developers weren't exactly enthused with the ordinance when it was put in effect in March. Among the many requirements included restaurant developers having to build one short-term bike parking spot and one encased, long-term one for every 2,000 square feet. In some commercial buildings, developers are required to even provide showers and lockers for employees who ride bikes to work.

Those in favor of the ordinance are hoping that providing Angelenos with more options for bicycle parking will hopefully take the city towards fulfilling the goal of becoming more transit-oriented.