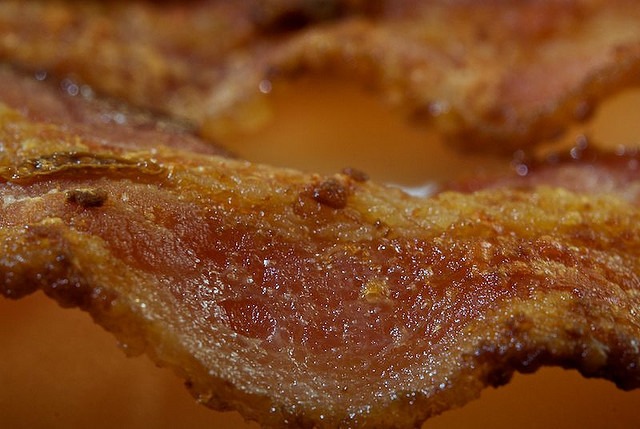 I hate to be a bearer of bad news for couples trying to conceive, but here it goes: bacon ruins sperm.

In a study by Harvard University, men who consume a regular portion of bacon or a small sausage daily are at risk of harming their sperm quality reported The Daily Mail. The same study noted that to improve sperm, men should eat fish notably cod or halibut.

The study is to be presented this week at a meeting of the American Society for Reproductive Medicine in Boston. The study compared the habits of 156 men going through in vitro fertilization treatments with their partners. According to the Daily Mail:

Men who consumed just half a portion of processed meat a day had just 5.5 per cent ‘normal’ shaped sperm cells, compared to 7.2 per cent of those who ate less. Men who had dishes containing white fish at least every other day - or half a portion daily - had far better sperm quality than those who ate it rarely.

Before straight men go on suicide watch, the article had a note of caution by Dr. Allan Pacey, the chairman of the British Fertility Society.

"The relationship between diet and men’s fertility is an interesting one and there is certainly now convincing evidence that men who eat more fresh fruit and vegetables have better sperm than men who don’t," he said.

"However, less is known about the fertility of men with poor diets and whether specific foods can be linked to poor sperm quality.

"In this instance, the authors link men’s intake of processed meat with the size and shape of their sperm. This may be a real effect, but the study is small and we know that accurately measuring sperm size and shape in the laboratory is fraught with error.

It makes me even happier to be a gay man who has no desire to have kids. It's also another notch to add to my list of reasons to despise the city of Boston, as if their sports fans aren't bad enough.