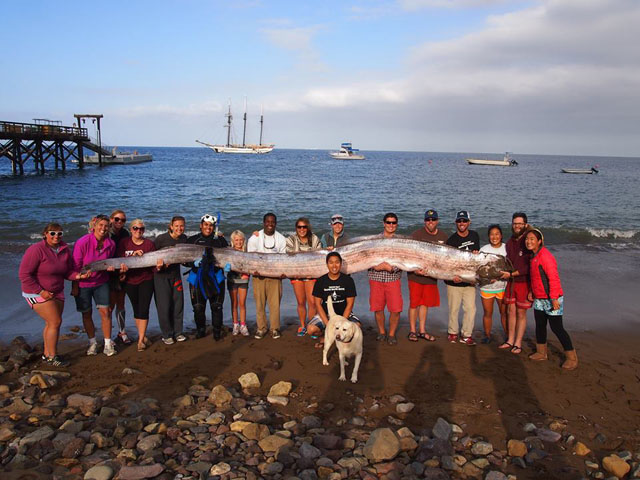 Never did anyone at the Catalina Island Marine Institute imagine they would find one, but an oarfish fell into their laps, so to speak.

Science instructor Jasmine Santana found the 18-foot carcass on Sunday afternoon while snorkeling in Toyon Bay off Catalina Island. Other instructors saw her struggling with the creature and ultimately 15 colleagues came to her aid to drag the beast onshore according to the Press Telegram.

Mark Johnson, the longest serving CIMI employee, remarked in a statement, "In 32 years here, I have never seen anything like this!"

Many kids who grew up in Southern California know about CIMI thanks to their camps at Toyon Bay, Cherry Cove and Fox Landing. I went to a camp with my sixth grade class in 1991 where we snorkeled, took hikes and learned about sea life and the heavens. The most adventure we had were bison roaming on our hiking trails and choppy waters while snorkeling. But nothing like this.

According to the press release, CIMI sent samples of the oarfish tissue and footage to Dr. Milton Love, a fish expert and author at UC Santa Barbara who will make the final decision on the species.

Also according to the release:

Oarfish are found in all temperate to tropical waters, but are rarely seen, dead or alive. The giant oarfish is the longest bony fish species, topping at around 56 feet. It is believed that oarfish dive over 3000 feet deep, which leaves them largely unstudied and little is known about their behavior or population. They are likely responsible for sea serpent legends throughout history.