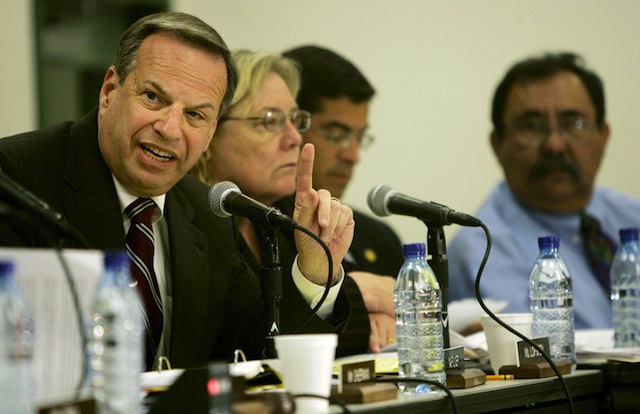 Bob Filner, when he was a congressional representative, speaks to committee members during a Subcommittee on International Terrorism and Nonproliferation hearing at the Imperial Beach Border Patrol on July 5, 2006. (Photo by Sandy Huffaker/Getty Images)

Ex-San Diego mayor Bob Filner agreed to never run for office and give up most of his mayoral pension to avoid jail time reports the LA Times.

Filner, who at one point was accused by 19 different women with varying allegations of sexual misconduct, pled guilty to one felony count of false imprisonment and two misdemeanor counts of battery which related to three unnamed victims.

In addition, Filner will spend three months under house arrest and undergo treatment by a mental health professional during three years of probation. During his probation, Filner will not be able to vote or carry a firearm.

We documented some of Filner's misdeeds and his stubborn refusal to resign from office until the nine-member City Council unanimously called for his resignation.

Filner, a former congressman, was the first Democratic mayor of San Diego in 20 years. Democratic City Council President Todd Gloria is the interim mayor until a special election takes place on Nov. 19 to replace Filner. If no one takes a 50% majority, a run-off election will take place in January.