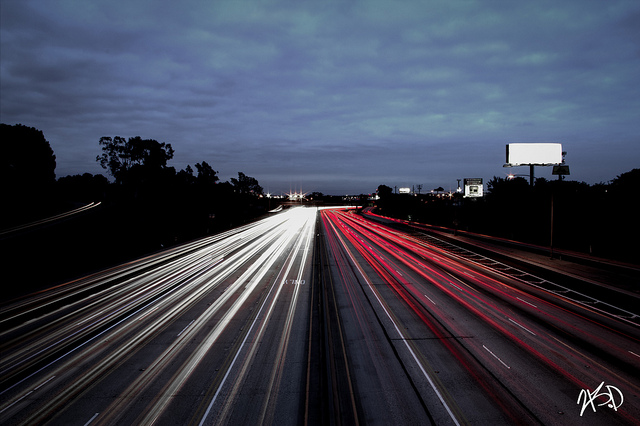 (Photo by 213design via the LAist Featured Photos pool on Flickr)

A woman in labor didn't quite make it to the hospital, giving birth to a baby girl on the 405 early Saturday morning.

The woman's husband assisted in delivering the baby around 1 a.m. in the back seat of their SUV, which stopped on the closed Santa Monica Boulevard off-ramp from the southbound 405 Freeway, City News Service reports.

The father took off his shirt and used it to swaddle the newborn, as can be seen in video taken at the scene.

"We got the call and they told us that the people were on the side of the freeway in the car," firefighter Tisa Murphy of LAFD Station No. 59 in West Los Angeles told CBS 2. "We got there and the baby was born already in the back seat."

The infant's grandparents and young sibling were also in the SUV at the time, according to CNS. "They had the whole family with them," said Murphy. She praised the parents for pulling over and not panicking.

"She was nice and alert and healthy," Murphy told CBS of the newborn. "What we did is just cut the cord and wrapped the baby up, kept the baby warm and transported it to the hospital."

She said mom and baby are both doing great. "I got to hold the baby and just see her little face. It was awesome. It was really awesome," Murphy said.