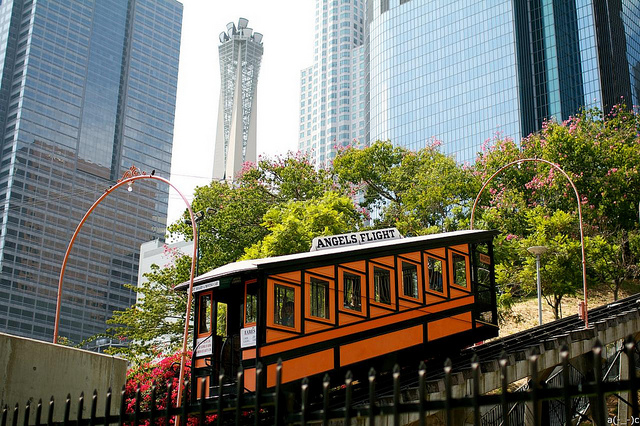 (Photo by indigoMood via the LAist Featured Photos pool on Flickr)

What caused the historic Angels Flight railway to derail in September? That's still not known, but the fact that operators were using a tree branch to override the safety system can't have helped.

The L.A. Times reports that the downtown L.A. landmark, which was originally built in 1901, had been experience "unintended stops for months," the National Transportation Safety Board said in a report released Thursday.

Because of those stops, operators had broken off a branch from a nearby tree and were using it to make sure the start button stayed pushed. Senior Angels Flight management officials were aware of the unorthodox workaround, operators told investigators.

On Sept. 5, the car named Sinai derailed near the middle of the track as it was headed to the bottom. According to the report, it was a bystander who finally called the Fire Department to report the accident after railway operators failed to seek assistance.

The second car, which was headed to the top, also stalled and passengers had to be evacuated onto the railway. Fortunately, no one was injured.

The report also suggested developing evacuation routes after one passenger in the derailed car was seen on video crawling onto the tracks, which are 25 feet above the ground, because there are no walkways or railing in case of emergencies.

The cause of the accident still has not been determined, the NTSB said.

The railway was shut down before after a fatality in 2001 that killed an 83-year-old passenger and injured 7 others when one of the cars crashed into the second one. It was reopened in 2010 with improved safety features.

The final decision about when Angels Flight will re-open rests with the California Public Utilities Commission, the Times reports.