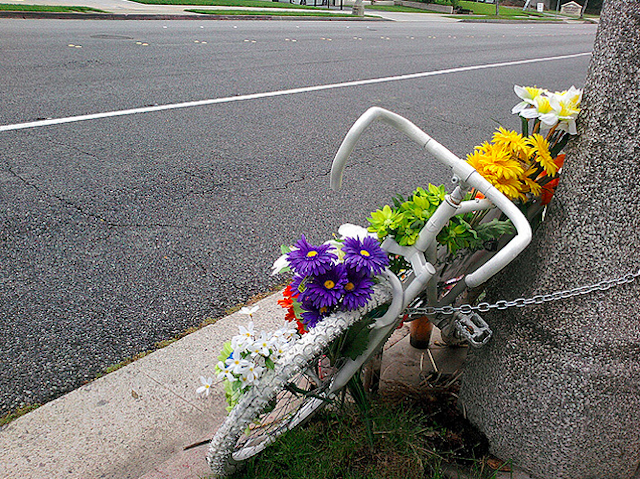 (Photo by melissssaf via the LAist Featured Photos pool on Flickr)

With the epidemic of hit-and-runs in the Los Angeles area showing no signs of slowing, several lawmakers are trying to increase penalties to drivers. One councilman who cited the overwhelming "culture of driver apathy" wants to make hit-and-run charges comparable to those for drunk driving.

Assembly Member Mike Gatto introduced a bill last December, AB 184, to extend the statute of limitations on hit-and-runs from 3 years to 6 years. It passed the Assembly and the Senate unanimously and has been awaiting a signature from Governor Brown since September 19.

On a local level, Councilman Joe Buscaino wants City Hall to establish a standing reward of $50,000 for information leading to the capture and conviction of suspects in unsolved hit-and-runs, LA Weekly reported last month.

After the latest fatal hit-and-run in Encino, Buscaino sent out an email announcement Monday saying, "While the City of Los Angeles is taking immediate action to address this ongoing problem, I call upon the state legislature to stiffen the penalties for hit-and-run crimes, making them equivalent in seriousness to DUI offenses."

Buscaino said, "A traffic accident is not a crime. It becomes a crime the moment you leave the scene and fail to render aid to the victim and fail to take responsibility for your actions. We must do everything we can to change the culture of driver apathy in Los Angeles, where motorists continue to display a lack of responsibility and concern, leaving a human being out in the street to die."

According to the LAPD, there are 20,000 hit-and-runs each year. In an article about the epidemic, the LA Weekly reported that nationwide, 11 percent of vehicle collisions are hit-and-runs, but in L.A., that number is a shocking 48 percent. (The data is from 2009, the most recent year for which complete statistics are available.) Hit-and-runs were responsible for 100 pedestrian deaths that year. The number of motorists and bicyclists who died in hit-and-runs was not released.

A recent sting in Moreno Valley, in which drivers failed to yield to an officer dressed in a giant gingerbread man costume in a crosswalk also demonstrated that drivers are just not paying attention to pedestrians.

Councilmember Bernard C. Parks is promoting pedestrian safety with National Walk to School Day at the 74th Street Elementary School tomorrow, Wednesday, October 9, at 7:30 a.m. According to a press release, "This walk will stress the responsibilities both motorists and pedestrians have towards ensuring their safety."