It's Official: L.A. Has The Worst Roads In The Country 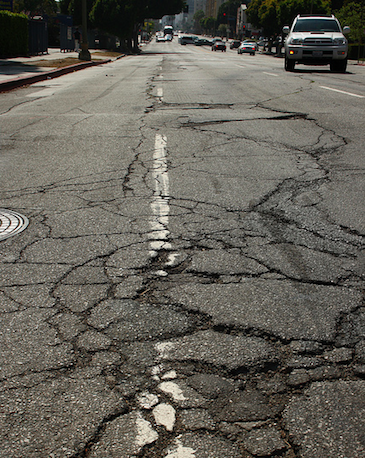 If you've long suspected that L.A. has the least-maintained roads in the nation, you are right on the money.

Los Angeles, Long Beach and Santa Ana were, predictably, ranked first in the country among large cities for the worst roads, according to a new study by the National Transportation Research Group, TRIP.

The study says 64 percent of major roads are in bad shape, leading drivers to spend an average of $832 dollars a year on maintenance due to wear and tear from potholes and other nasty road conditions. (And we don't even have snow and ice to blame.)

Will Kempton, Executive Director of Transportation California, told CBS 2 that things will likely get even worse, since federal funding for local highways is expected to be cut dramatically next October. (That is, unless Congress approves additional revenues. We'll just start holding our breath on that one, shall we?)

"Without a significant boost in transportation funding at the federal, state and local level, conditions will continue to deteriorate, drivers will continue to pay the price, and our economy will suffer," Kempton said.

Two other SoCal cities also made the list of worst roads: San Diego was ranked fifth with $758 in additional vehicle operating costs and the Riverside-San Bernardino area was named 13th worst with extra car costs of $638.

Cal-Trans is well aware of the problem, Fox reports. "We have made significant progress in improving our pavement we have plowed in about 4 billion dollars in repair projects, but we do need to have 3.5 billion in funding every year for the next ten years to keep up with our pavement needs. This year we only have 1.5 billion. "

In 2011, Dan Kegel pointed out the "bone-jarringly bad" conditions on Wilshire Boulevard (pictured in the photo above), and suggested that a gas tax go towards repaving the city's worst roads. Fortunately, portions of Wilshire finally were repaved last year, but other well-traveled streets are still in need of major TLC.

This past July, Mayor Eric Garcetti kicked off a "Neighborhood Blitz" of pothole repair.

Now, how about those dangerously cracked sidewalks?