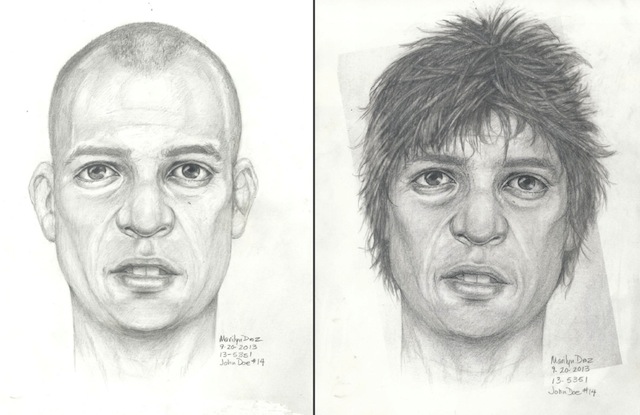 (Sketches courtesy of the L.A. County Department of Medical Examiner-Coroner)

The L.A. County Coroner's office is seeking the public's help with the identification of an unidentified male found along Rio Hondo Riverbed bike path near Lincoln Avenue and San Gabriel Boulevard in Montebello.

The skeletal remains of "John Doe #152" were found July 31, 2013 at approximately 11:00 a.m., according to a press release from Chief Coroner Investigator Craig Harvey.

The man was determined to be a White or Hispanic male between 35 and 55 years of age. No wallet, clothing, or i.d. were found with him or in the surrounding area.

The only possible identifying object: a partial denture at the back of his lower right jaw.

Officials released two artists' sketches of what the man might have looked like when he was alive, one with shaggy hair, one with almost no hair. They have not specified if he died of natural causes or was the victim of a homicide.

Anyone with information is asked to contact Investigator Daniel Machian at the Los Angeles County Coroner Identifications Unit at (323) 343-0754 or the Coroner Investigations Division at (323) 343-0714, which is open 24 hours.

Related:
A New 'Coroner to the Stars' Is On the Job in L.A. County