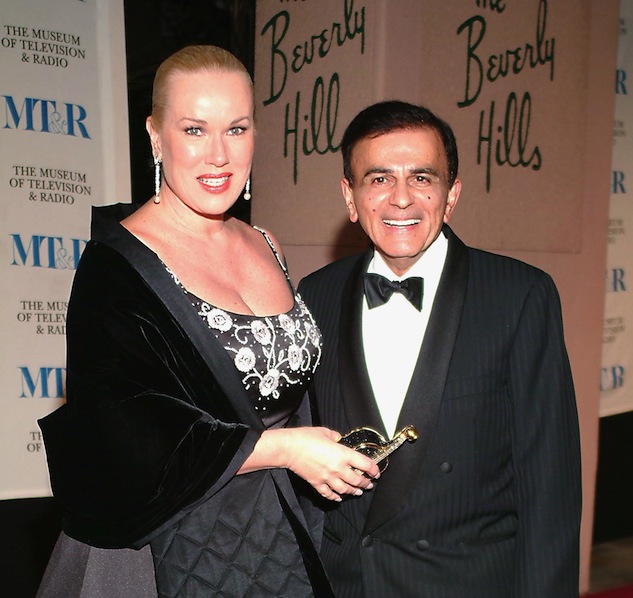 Jean Kasem and Casey Kasem in 2004 at an event at the Beverly Hills Hotel. (Photo by Michael Tullberg/Getty Images)

The children of "Top 40" radio show host Casey Kasem staged a protest yesterday outside his home, claiming that his wife, Jean, is keeping them from seeing their 81-year-old father, who has advanced Parkinson's.

His children from his first wife claim that Jean Kasem has kept them from seeing their father for months. His brother says he hasn't seen him in a year and friends claim it's been even longer for them.

Kerri Kasem told ABC 7 that Jean won't answer their phone calls and tells them to go away when they show up.

That's why they showed up yesterday with signs outside their father's house in Holmby Hills, filming their protest to call attention to the situation. She told TMZ to pass on this message. "Your children are here for you. We have not abandoned you."

Kerri told ABC, "He can't really speak, but he knows we're there. And last time we saw him, he could shuffle a little bit. He had a hard, very hard, time walking. He was just deteriorating due to Parkinson's disease."

She says that none of the children are in the will and they don't care, they just want to see their father, according to TMZ.

Mouner Kasem fears he won't see his brother before he dies, "I've got a feeling I might not see him again, and that's why I'm here," he told ABC. "We don't want to see him go and not say goodbye and not love him and not support him. We don't know how long he has," he said. While ABC reported he hadn't seen his brother in a year, according to TMZ, the two haven't seen each other since Casey married Jean... 33 years ago.

"We fear that he's been isolated and neglected, and so that's why we stand here today," said Gonzalo Venecia, who was Casey's personal assistant for 24 years.

Chuck Olsen, who's known Casey for 63 years, says no one has heard from the radio personality and voiceover artist since April.

Jean Kasem played Loretta Tortelli on Cheers and on her own spin-off series.

TMZ reports that Jean called the police on the protesters. Back in May, she told the gossip site that she was talking to Bravo about joining The Real Housewives of Beverly Hills.

In addition to being a Top 40 radio DJ, Kasem has long been the voice of Shaggy on Scooby-Doo. He also voiced Robin on the animated series Super Friends and several voices in the Transformers series.