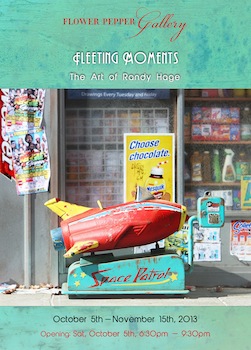 Next week Randy Hage's unique art exhibit opens, bringing New York City storefronts to Los Angeles. His insanely detailed and accurate replicas are miniature versions of the real deals, which he started working on after the death of his 4-year-old daughter—"My wife told me that she thought my attachment to the loss of the New York storefronts was somehow birthed from emotions surrounding the loss of our daughter," he said when talking about his pieces. 100% of the sales from his show are being donated to the Rachel Ann Hage Neuro-Oncology Research Fund, in honor his daughter.

We asked Hage if he would have any homages to Los Angeles at his show, and it turns out he's created miniature versions of LA's beloved River Cats—the storm drain covers artist Leo Limon has been painting for over 35 years. Hage told us:

"When I was a child, riding in the car on long boring trips, I always looked forward to the Los Angeles River Cats. The Los Angeles River drainage culverts have these steel doors that open with the force of flowing drain water. They are round and have triangular hinge support plates. They look like cats.

In the early 60s, an artist took to painting cat faces on them. Later, an artist named Leo Limon, took it upon himself to care for the cats and keep them in good condition, as well as adding some of his own designs to the culvert covers. I think it was in the 80s that Caltrans put up higher fences and shrubs to cover the view from the 5 freeway due to accidents from drivers trying to catch a glimpse of the beloved cats.

One of my favorite aspects of the works was that down the freeway a little further, someone had painted the face of a mouse who was obviously on the look out for any cats. One of the wonderful fleeting moments from my childhood. Esoteric perhaps, but definitely meaningful. This piece is an homage to the many river cat artists, and to Leo Limon who is their selfless caretaker."

As for his process, Hage revisited the cats in person, and researched their history and specs—"immersion and intimacy with my subject is the key to a realistic result." His miniatures (one of which sold while he was still working on it) are 1/12th the actual size. Check them all out at his show, which runs October 5th through November 15th at Flower Pepper Gallery.