Overheard in L.A.: The Truth About Horrible Drivers 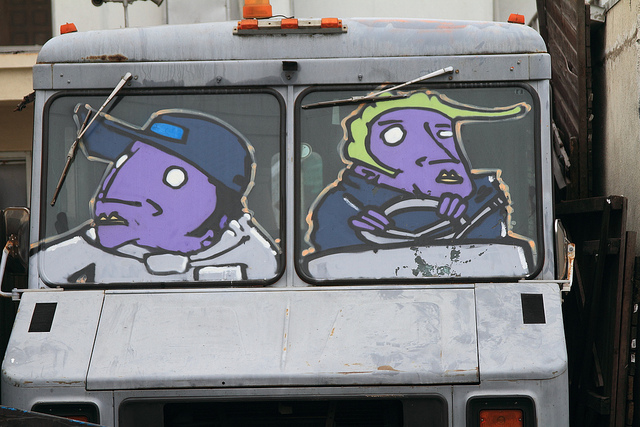 Driving in L.A. (Photo by Jo via the LAist Featured Photos pool)

This week's edition of Overheard in L.A. features bits of overheard conversation from Whole Foods, Trader Joe's and Chipotle.

Overheard of the Week
"People in L.A. are terrible drivers. Trust me, I almost hit a bicyclist, like, every day."
via @DavidG_C

Come, Let Us Drown Our Sorrows In $8 Juice
"Oh well, all comedians are just totally miserable. Writers too, I guess."
At a juice bar via @LeRenardRouge

Crushed Dreams Of Pantless Conferencing
"The worst of it was, I was on a video call and the dog was desperate to get out. But I just had a shirt and no pants on so I couldn't get up. And the dog went to the bathroom on the floor."
In Silver Lake Trader Joe's via Fran Levy

Think of The Children!
Mother: Where in the world did you learn the term camel toe?
Child: Miley Cyrus.
via @RandyRULES

The Good Life
"Don't you just hate it when your WiFi doesn't reach your hot tub?"
via @ChrisEastvedt

The Good Life 2
"What the hell? We're out of freakin' Perrier!"
At work via @xXSuperJudeXx

In Defense Of The Selfie
"I'm not selfie-concious."
"Me neither."
"I take selfies all the time and I love it."
"Yeah, van Gogh was the same way."
via @DaddarioAlex

Is It?
Showbiz industry guy to his female friend: "OMG. This is worthy of a snapchat!"
At a cafe in Burbank where iced coffee is served in a MASON JAR via Lindsay William-Ross

Watch Out
"Anyone who's taking themselves too seriously, you've just got to fuck up their vibe a little."
Near Echo Park Lake via @alicebolin

Romper Problems
"Dude, I have a romper on...No way."
via @gracesegundo

Actually, That Explains Everything
"I'm an actor, writer, director, so that's what I'm doing."
At Chipotle via @StevenWilliamz

How To Start The Night
"This is my lesbian lover I just had a fight with. Let's get wasted."
In West Hollywood via @Girl_Genius

Watch Where You Point That Thing
"I'm wearing a Ring Pop, please be careful."
At a party via @apocalypstick

Drama Queen 1
"I got the drama queen special: 5htp St John's wort and valerian."
At Whole Foods via Fran Levy

Drama Queen 2
Queen 1: Everything with you is a production.
Queen 2: But it's worth it.
In West Hollywood via @gerardseifert

How We Live
One lady: "What did you do?"
Another lady: "Last night? I made macaroni and cheese with pot butter and went to bed at 9:45. What did you do?"
In line at Sunny Spot for a meatball pop-up via Mary Quick