Shopping malls, famous studios, and...well, is there really all that much to do in Burbank if you don't live or work there? One thing the city has in spades are great spots to satisfy your sweet tooth. Come along for the ride as we take a sugary spin around a few sweet spots in Burbank. 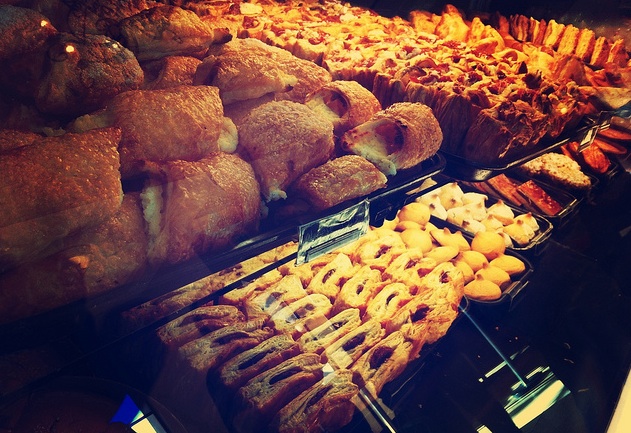 PORTO'S BAKERY
Porto's Bakery's Burbank location is ever-bustling with lines of fans waiting to order up not only savory delights like their Cuban sandwiches or their famous potato balls, but also from their gleaming cases laden with tantalizing baked goods. You can stock up on whole loaves of bread, or indulge your sweet tooth with Napoleons, eclairs, danishes, cake slices, or whole cakes.

DOUGHNUT HUT
Some of the best doughnuts (or donuts, if you will) in L.A. are actually here in Burbank at this unassuming corner stand-alone shop. Head up to the window of the Hut to press your nose to the glass to see the displayed rows of iced and sugared gems. Chocolate Old Fashioneds, French Crullers, Maple Bars, Bear Claws, and just plain ol' glazed are baked fresh in the wee hours, when you can croak out a bleary-eyed order of sweet goodness (and don't forget the coffee). 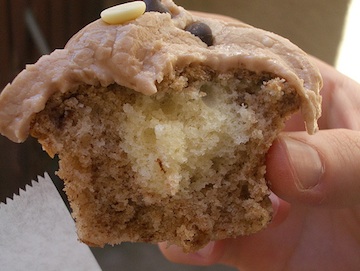 Inside a Black and White Milkshake cupcake from Yummy Cupcakes (Photo by jslander via the LAist Featured Photos pool on Flickr)
YUMMY CUPCAKES
One of the first in a batch of mom-and-pop shops specializing in the trendsetting cupcake, Yummy Cupcakes has expanded their flagship shop space on Magnolia in Burbank, as well as their menu items since they opened in 2006. From their basic vanilla cake with chocolate frosting to their more adventurous flavors like Guinness or Root Beer Float, or their "Cupcake in a Jar," Yummy remains the definitive spot in the area for a decadent cupcake (or two, or twelve).

QUENELLE
Quenelle is the new kid on the block in Burbank, specializing in ice cream and other pastries. Thai Iced Tea, Caramelized Pineapple, and Apricot Cheesecake are among the selections for ice cream flavors, though the Blueberry Pie is what they get the most props for. They also have popsicles to keep things cool, and baked goods to fill your belly, like tender scones and their salty chocolate chip cookie. 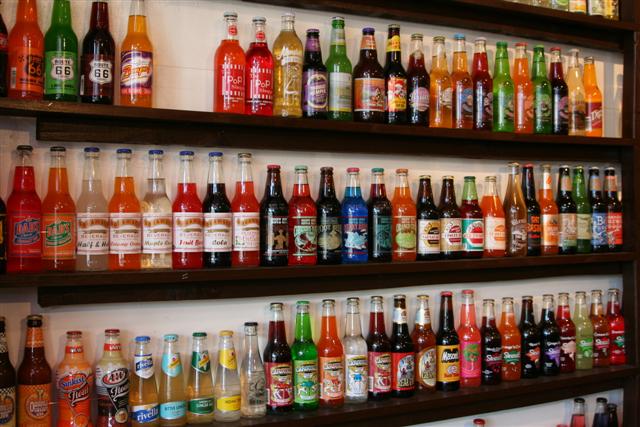 ROCKET FIZZ
Load up your basket at Rocket Fizz with all the candy your parents didn't want you to eat when you were a kid. Strolling around their dizzyingly bright and beckoning displays of candies from decades back is an instant hit of sugary nostalgia. Make sure to check out their impressive collection of quirky sodas.

MARTINO'S BAKERY
Martino's is the kind of old fashioned bakery where temptation abounds. They are beloved for their moist Teacakes, as well as their decorated party cakes, cupcakes, and gelato. Loyalists love their holiday pies, cookies, and cafe beverages, like their lattes and cappuccinos.

Bonus stops: The Jelly Bean Factory for candy, United Bakery for teacakes that rival Martino's, Olive & Thyme for big slices of cake and decadent cookies, and Romancing the Bean for goodies like Cake Monkey's delectable treats.