How To Ride A Bike In L.A. (And How To Drive A Car Around Bikes)

Unless you've been living under a rock for the last decade, you're likely aware that Los Angeles has a growing culture of people who (gasp!) ride their bikes instead of driving! Like it or not, it's a reality right here in our beautiful City of Angels, and many on the roads may benefit from a lesson on how to coexist.

I am one of those people who prefers to pedal around on two wheels instead of four. However, in my months of pedaling around L.A., I've noticed that lots of people in our fair city—car drivers and bike riders alike—really don't understand how to share the road and very often instead resort to being assholes to each other. Speaking as a cyclist, I apologize to drivers who have dealt with jerks on bicycles.

Here are five tips for drivers and five tips for cyclists aimed at helping us all peacefully coexist on the streets of Los Angeles: 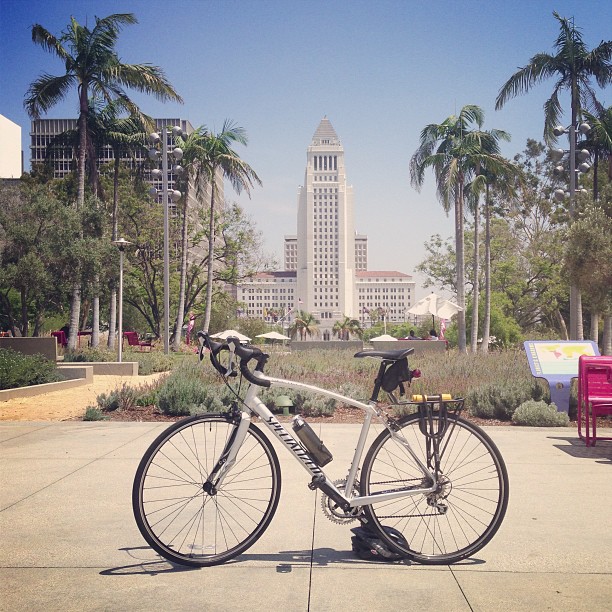 1. Understand What Bicycles Are Legally Entitled To Do
A charge often asserted by drivers is that cyclists do not have as much right to the road as do cars. This is wrong. Cyclists are entitled to use one entire lane of a multi-lane road in the event there is not enough room on shoulder to safely ride, there is no bike lane, or riding in the right hand side of the lane places the cyclist too close to the door zone. (The door zone is when you're riding within the radius of a car door opening into traffic—a potentially deadly accident.) In addition to being legally entitled to claim a lane, cyclists are also allowed to move over to the left hand side of a road for left turns. If you see a cyclist signaling for a left, slow a bit and let them over. It just takes you a second and makes our lives less anxiety ridden.

2. Please Don't Honk
Car horns are loud and can be startling! For some perspective, think about how a startling a horn can be from inside your own car with windows up. Now imagine that you're outside, in the wind, and a horn suddenly blasts not 10 feet from your ears. The last thing I want to do is be startled enough to move unexpectedly in traffic. If you absolutely must honk, just lightly tap the horn lightly a couple times; it'll be more than enough to get our attention.

3. Pass Responsibly
Responsible passing boils down to essentially just leaving enough room between your car and the bicycle on your right. This is something I've found most L.A. drivers do pretty well, but it never hurts to be reminded too. Recently, the California State senate passed a bill that would require drivers to leave at least 3 feet when they're passing a cyclist. While the effectiveness of this bill might be limited (seeing as everybody stopped texting and driving when that was outlawed), please give us some room. We're unprotected and very vulnerable to cars and trucks; a 10 second lane change isn't that hard for drivers.

4. Look Twice When Opening Your Vehicle Door:
I spoke of the door zone earlier in the first tip, but I just want to reiterate that one of the biggest dangers to cyclists is when a car door opens right in their pathway. This happens without warning, and sometimes a cyclist is unable to swerve in time and ends up hitting the door and the person getting out of the car. Just double check in your mirror and over your shoulder before you open your door, it may save a cyclist's life (and certainly the cost of a new door).

5. Communication Is Key
Something a lot of drivers might not realize is that there are different types of cyclists. While some, like vehicular cyclists, will behave exactly like a car on the road, others, like a family out for a ride on Sunday afternoon, will be more relaxed. Regardless of who you're driving your car around, be communicative with the people on the bicycles. We don't bite and a quick gesture from you changes our perception from "rolling death machine" into "courteous driver giving me some space."

1. Stop at Lights and Stop Signs
The number one complaint about cyclists is that they don't obey the rules of the road. Just stop at the light. Please. When you cruise through red lights and stop signs it makes us all look bad, not to mention it's also rather dangerous. Lights should be followed at all times. In regards to stop signs, I understand that momentum can be difficult to build back up, but if you treat a stop sign as you would in a car, a California roll is acceptable (just as long as you don't go out of turn).

2. Leave Room for Right-Hand Turns
This is something most cyclists realize, but not all. When stopped at a light, move over to the left side of your lane (I usually move into the crosswalk). Not only does it make you visible for the drivers in the adjacent lane, it also makes it easier for drivers in your lane to turn right if they need to. Visibility plus space to turn makes everybody happy!

3. Claim a Lane Only If Needed
While I'm well aware that we are allowed to claim a full lane any time there isn't a bike lane (and I do frequently) lots of streets have very wide right lanes that can provide a safe area for cyclists. While claiming a lane is legal and safer than riding close to parked cars, you still run the risk of annoying a driver. Just be careful, and make sure to check over your shoulder before moving into the lane.

4. Always Use Hand Signals
Hand signals are crucial when riding a bike. Besides signaling which way you are going to go, they also show drivers that you're making an effort to not be that cyclist. In case you need a reminder, hand out right for a right turn, hand out left for a left turn. Always make sure to give plenty of time between making your signal and making your turn/lane change, especially if you're crossing multiple lanes into a left-hand turn lane.

5. Communication Is Key
While hand signals are a good start being on a bike means you should be doing your best to communicating with drivers, pedestrians and other cyclists. Anyone in Los Angeles knows the magic of a thank you wave (and the good that both people feel when one is issued). It works the same way when you're on a bike. Make sure to acknowledge other drivers if they slow down for you, or let you go first at a stop sign. Not only is it the proper thing to do, but it helps instill in the mind of drivers that not all cyclists are jerks who ride around with a severe case of moral superiority.

P.S. Please lock your bike responsibly. The last thing I want to do is untangle brake cables and drop bars when I'm trying to get somewhere else.