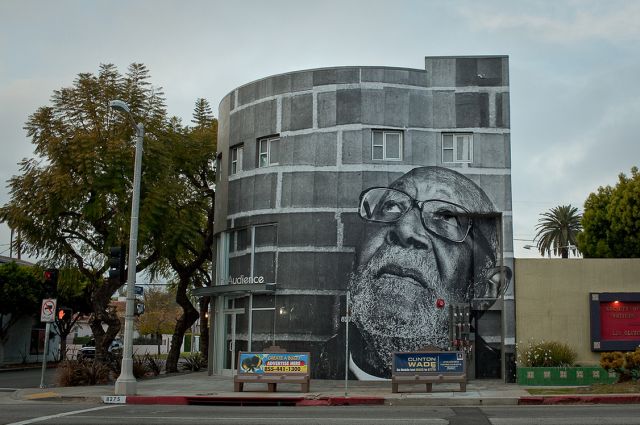 A mural in Fairfax. Photo courtesy of Jeff Houze via the LAist Flickr Pool

The council voted 13-2 to lift the ban in an effort to revive the city's long and storied history in regards to mural art. A final voted is expected next week.

The new rules go a little bit like this: Murals are permitted to be placed on business and industrial zones, provided that artists register them with the city and pay a $60 application fee, according to the LA Times. As long as the works have no commercial messages in them, the city will allow them. The works must also be up for at least two years to try to curb advertisers. Indeed, the ban was originally put in place as a response to advertisers putting up murals disguised as local art to sell a product.

In addition, only neighborhoods who "opt-in" to the program are permitted to have murals on their walls.

Originally, city attorneys presented two versions of the ordinance to the City Council last month—one that would allow and one that would prohibit murals on single-family homes, according to City News Service. The council eventually opted for the latter.

But while the moratorium was technically in effect during the past ten years, it was weakly enforced. Many residents still created mural art without any real repercussions, including James Franco, who created a very James Franco-y mural in Melrose without any consequences.

However, when "World's Nicest Pop Star" Chris Brown painted a few fearsome fanged creatures on the wall of his Hollywood Hills home, City Hall was informed by dozens of neighbors in the area, and Brown eventually opted to paint over his masterpiece.

The moratorium has been a contentious issue for years in many pockets of the city where mural art regularly flourishes. In 2011, the city created a "Mural Task Force" that looked into the overall impact of the ordinance.

City Councilman Jose Huizar, who sponsored the law, states that a second confirmatory vote on the ban lift will take place next Wednesday. If that goes through as planned, Angelenos across the city will finally be able to let their artistic voices be heard.

UPDATE, SEPTEMBER 4, 2:30 P.M.: Ladies and gentlemen, the decade-long prohibition of murals on privately owned buildings has been lifted. In a 12-3 vote today, L.A. City Council finalized the measure, which will next go before the pen of Mayor Eric Garcetti.

Council members will continue to meet in the coming weeks and months to iron out mural regulations.