A West Hollywood plastic surgeon who was featured on Dr. 90210 has revealed that he performed a number of Frankenstein-esque procedures on one of his patients to turn her into "The Perfect Wife."

Dr. David Matlock first met his future human canvas, Veronica, in 2007 when she came to him to perform a post-partum vaginoplasty that he had pioneered. She was 20 pounds heavier then, but Matlock insists it was "love at first sight." He convinced her to undergo an expensive and risky "Wonder Woman Makeover," which involved liposuction procedures in the chin, arms and thighs, as well as a "Brazilian Butt" lift.

Shortly after the transformation, Matlock took Veronica out on a date and proposed to her on the spot, presumably satisfied in his completed masterpiece.

Veronica has undergone several other procedures since then and considers herself a "walking advertisement" for her husband's business. She has also been featured on the appropriately-named TLC program Plastic Wives. 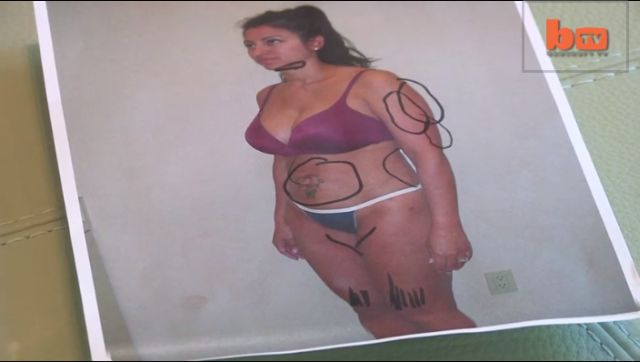 The future Mrs. Matlock before her "Wonder Woman Makeover."

Gawker reports that one of the more interesting operations Mrs. Matlock has undergone is the "G-Shot" procedure—which involves injecting a "human engineered hyaluronan" into a woman's g-spot to heighten her sexual experience. It is one of the procedures her husband has pioneered.

Dr. Matlock does not limit his passion to his new plastic bride. He has undergone a number of bodysculpting procedures on himself, including his trademarked "Vaser High Def Liposculpting," which includes injecting fat into his pecs, biceps, triceps and calves for that über-manly physique. The couple follows a strict diet to maintain their bodacious bods and show off their physiques during various bodybuilding competitions in the area.

The couple's seemingly endless quest for perfection is lost on Veronica's 9-year-old daughter, Isabelle. According to Bancroft.tv, Isabelle would never undergo any of her parents' procedures "because it's not really you, like I want to be myself."

Here's a video of the lovely couple below.