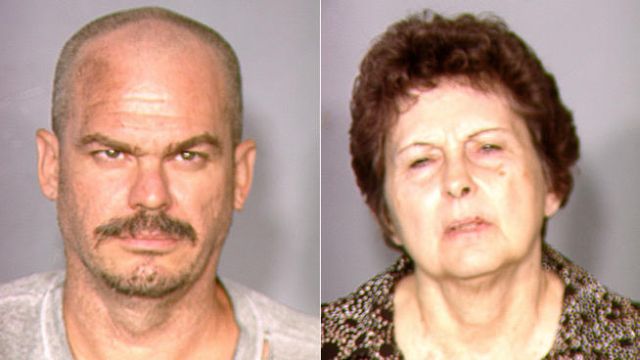 Two people arrested Tuesday night over a plot to kidnap and kill law enforcement officers in the Las Vegas area have ties to California, according to NBC Los Angeles.

David Allen Brutsche, 42, along with his roommate, Devon Campbell Newman, 67, were arrested after a months-long investigation by Las Vegas police. They are believed to be a part of the "Sovereign Citizen" movement, which espouses anti-government and anti-taxation beliefs.

According to NBC 4, Brutsche was convicted in 1993 of molesting a child and in 2001 of indecent exposure. Both incidents happened in Santa Clara County, in Northern California. Additionally, in 2009 Brutsche was arrested after a six-hour standoff that began when he would not come out of his trailer to be arrested for failing to register as a sex offender, according to NBC Bay Area.

Newman has an interesting past as well. According to her LinkedIn profile, she has been the PR director for the Church of Scientology in Las Vegas since 2010 and has worked on projects such as Foundation For a Drug Free World, Youth for Human Rights Foundation and the Way to Happiness Foundation. According to The Underground Bunker, an anti-Scientology blog run by the Village Voice's Tony Ortega, Newman also worked for the Sea Org, another branch of the church, in Los Angeles.

The two came under suspicion by law enforcement in April, when Brutsche was observed committing a number of crimes in the Las Vegas area, according to Lt. Jim Seebock, who heads the counter-terrorism unit for the Las Vegas Police Department. The LVPD assigned an undercover cop to act as an accomplice to Brutsche and Newman and collect information on them.

"As the investigation progressed, we became aware that these two individuals were extremist in their beliefs, and were actively plotting to kidnap and kill at least one southern Nevada police officer," said Lt. Seebock during a press conference.

During their arraignment on Friday, both Brutsche and Newman stated that they do not acknowledge the court's authority to keep them in jail, according to the LA Times. They have both been charged with conspiracy to commit murder, attempted first-degree kidnapping with use of a weapon and conspiracy to commit kidnapping.