It's A Mystery: Why Was The Hollywood Sign Lit Up This Week? [UPDATED]

[Note: Thanks to reader tips, we now have an answer to this mystery.]

For the past few nights, Hollywood folks have been abuzz over the fact that the famous Hollywood sign has been lit for the first time in years. Photos of the sign bathed in light on August 20 and 21 are all over social media, but a spokesperson for the landmark assures LAist that it's not being lit by them.

While it is the 90th anniversary of the iconic sign this year, a spokesperson for the Hollywood Sign (yes, it has a spokesperson and a board of trustees who maintain it), said that's not why it appears to be lit.

"The sign is definitely not being lit, that's just not something that is done," the spokesperson, who asked we not use her name, assured us. She checked into whether any filming had taken place near the sign recently, but the only production, a shoot for French TV, happened during the day and much lower down the hill.

"There is nothing planned and nothing authorized," she insists

She also said it's impossible that anyone sneaked up to the sign and rigged some lights themselves. "It's not legal to be right next to the sign, plus it's dangerous," she points out. "There are rattlesnakes and landslides." Also, the whole area is under 24-hour surveillance by the LAPD since pranksters used to love to vandalize the sign.

As the official site for the sign posted, "The sign is located on rough, steep terrain, and is encompassed by barriers to prevent unauthorized access. In 2000, the Los Angeles Police Department installed a security system featuring motion detection and closed-circuit cameras. Any movement in the marked restricted areas triggers an alarm that notifies the police."

We talked to Film LA and they confirmed that the one film shoot by the sign in the last few days was only in the afternoon and had wrapped by sundown. "Whatever it is, it's not film-related," they told us. They also checked with General Services, the division of LAPD that monitors the sign, and they are also clueless, as is the Griffith Park film office, which has to approve filming near the sign.

Given how much paperwork all productions have to fill out to film by the landmark, Film LA told us, "It would be very difficult to film there without anyone's knowledge."

Area resident Babette Pepaj snapped some photos of the unusual occurrence. The first night, August 20, she went out at 10:30 p.m. to walk her dog and saw the lights had already been turned off. The second night, she was able to grab a photo at the same time.

Her neighbor happens to be a cinematographer (this is Hollywood) and he marveled, "It's so well lit." Pepaj knows a thing or two about lighting too, having been a producer on Road Rules and The Real World. "This was too perfectly lit," she tells us. "It was definitely not just the moon. It was lit from below. There were several lights, not just one."

She wasn't the only one fascinated by the mysterious lights. "There was so much traffic going up Beachwood, everyone was seeing the light and going to it," she said. 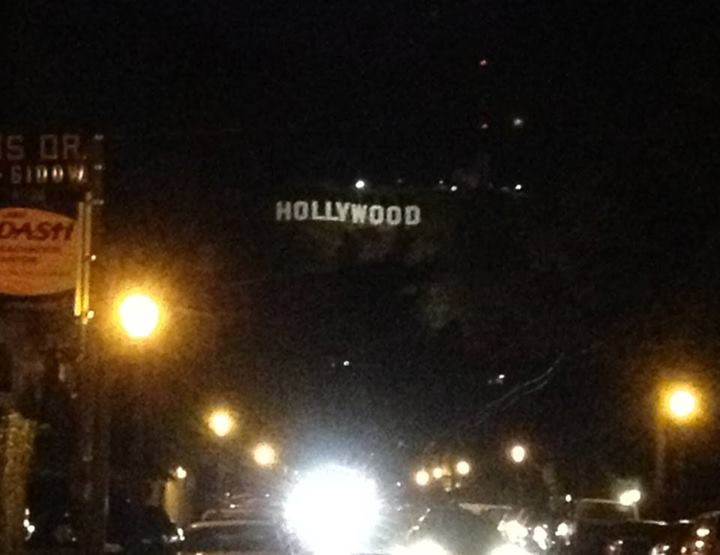 So what is going on? A few theories.

It's the new paint job
The sign was just given a fresh coat of paint in December, but that can't really explain why the whole area seems to be spotlit, even if the paint used is Sherwin-Williams High Reflective White, according to the Hollywood Sign Trust's site.

It's an Internet hoax
Dozens of people, including Papej, documented the phenomenon on Twitter, Facebook and Instagram. While the Hollywood Sign spokesperson said some of the photos "look familiar," it's highly doubtful the whole Internet is conspiring in an elaborate hoax, as the Hollywood Sign folks initially thought must be the case.

It was the full moon
We have had an unusually bright full moon, but that wouldn't account for the "perfect lighting" that appeared to come from multiple sources.

A helicopter happened to be flying by at the right moment
Police helicopter searchlights are pretty intense. Did all these amateur photographers happened to snap the sign just as LAPD flew by? When we called the LAPD's media relations line, they brusquely told us they "have no information" about what may or may not be going on at the sign and didn't care to speculate. Here's what a helicopter spotlight on the sign looks like, fwiw.

A new light in the area just happens to be shining right on the sign
When we called the Hollywood Chamber of Commerce, they had no idea of any new lights in the area (temporary or otherwise) and seemed doubtful that any Hollywood premieres, at, say, the Chinese Theatre or the Cinerama Dome, would end up shedding light on the sign.

No, it really is publicity
The Hollywood Sign Trust is throwing a 90th birthday bash on September 19 at the W Hotel, but this isn't early publicity for that event, they assure us. Or could it be a super-secret Hollywood promotional stunt? (We're looking at you, J.J. Abrams.)

It's the end of the world
Could it be alien robots? The new apocalyptic comedy The World's End, is opening this weekend. The Hollywood premiere happened on August 21, (at the Cinerama Dome, with an after party at the Cat and Fiddle). Would they really go to the trouble of mysteriously and anonymously lighting up the sign as an obscure promotion for their film?

It was a ghost
Could it be the ghost of Peg Entwistle, the silent-era actress, who —despondent over failing to make it in the movie biz—jumped off the sign to her death in 1932 and is said to still haunt the site?

The sign is just magic
As a blurb on the official site gushes, "Although the Sign's appearance and purpose have evolved over the years, its basic aspirational message remains the same: This is a place where magic is possible, where dreams can come true."

UPDATED, August 24, 1:12 P.M., Adam Boardman, the resident who saw the mystery film crew on August 21, gave us some more info on where they were located.

Boardman tells us how to get the location where he saw the film crew "Drive up Beachwood canyon to Ledgewood drive, hang a left and go all the way to the top. Or plug 6084 Mulholland Hwy into your GPS."

This is approximately where the crew would have been, based on that address. 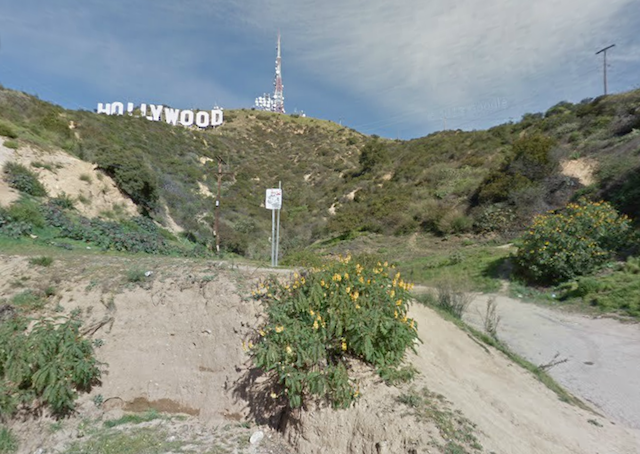 The mystery filming site near the Hollywood Sign. (Photo via Google Maps)

Still waiting to find out who they were and why no one knew about the shoot.

UPDATED, August 24, 10:00 A.M., While we've loved speculating about what could be going on, it appears that it was just a film shoot after all, although one that no one at the Hollywood Sign Trust, LAPD or Film LA knew about.

Several readers let us know they saw a film crew in the area, although no one caught the name of the production.

hey guys- I live in the neighborhood and went running up there on the 21st. There was some shoot being set up immediately below the sign with enormous lights and a ton of gear. I said hi to the crew guys who said it was a night shoot but I didn't ask what for. —Adam Boardman, via email

I talked to a friend last night who's a location scout: He's shot near the sign before and confirmed that you need to clear it through the Parks Film Office as you need keys to gates on the site that are normally kept locked. As that office and Film LA are both closed over the weekend, we won't know which production it was until Monday. It's definitely puzzling that no one had even heard of the shoot since filming anywhere near the sign usually requires a lot of paperwork.

Other readers have suggested it was a night shoot for Glee or that it was somehow related to an event at the Scientology Celebrity Centre on Franklin Avenue.

As soon as we find out more, we'll let you know.