Metro Adventures: What To Do On The Red Line (Part 2)

As a continuation of our last Part 1 article, we continue this week with the portion of the Red Line between the Vermont/Santa Monica station, and the line's end in North Hollywood. Getting to the Red Line isn't hard, and Metro's website has a map which includes parking information throughout the network. Westsiders can connect in from the Metro Expo Line, which takes you right into Downtown. Angelenos to the south can ride the Blue Line to 7th/Metro, and those who live along the Gold Line can use it to get to Union Station.

A warning to Valleyites; the North Hollywood and Universal City Station parking lots are filled very quickly on weekdays, so be prepared to look for parking around the station. Alternatively, you can usually find lots of street parking around the Laurel Canyon Orange Line station, and then ride that one stop to the North Hollywood Red Line station.

Purchase a day pass for your TAP Card; it's only $5. If you don't have a TAP card, a day pass and TAP card combo will cost you $6. Day passes make sense if you're going to more than one stop along the line, so if you're exploring or transferring, you'll want one.

I've include six of the Red Line's 14 stations (And the Red Line's terminus is Union Station, a station which I detail in the Gold Line Part 1 guide.) 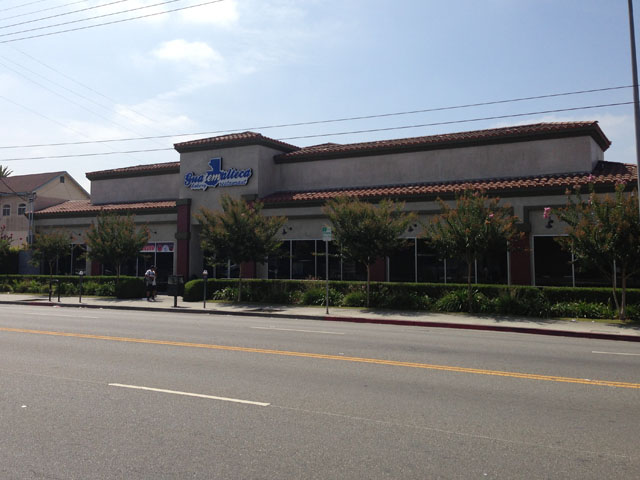 Guatemalteca is an example of Los Angeles food culture at its best. The Guatemalan bakery and restaurant specializes features a variety of both bread and dish options and they make an amazing chile relleno. Jonathan Gold dubbed it a "locus of Guatemalan-American life in central Los Angeles."

Although they aren't as common as they should be, Los Angeles does host its fair share of quality independent bookstores, including Skylight Books in Los Feliz. Skylight books is a well-stocked, mid-sized bookstore stocking the usual stock of classics, fiction, biographies, and history books, as well as left-leaning books. It's easy to find books that promote cycling and occupying (wall street) alike. Skylight Books is in a minority of bookstores that remains profitable into the digital age too. Check out their events calendar.

There are tons of awesome restaurants surrounding the bookstore, including Juicy Burger and Fred 62.

Directions: Exit the Vermont/Sunset Station and walk straight north on Vermont. You don't have to cross Sunset or Vermont. Skylight Books is located about two blocks north of the station at 1818 N. Vermont Avenue. 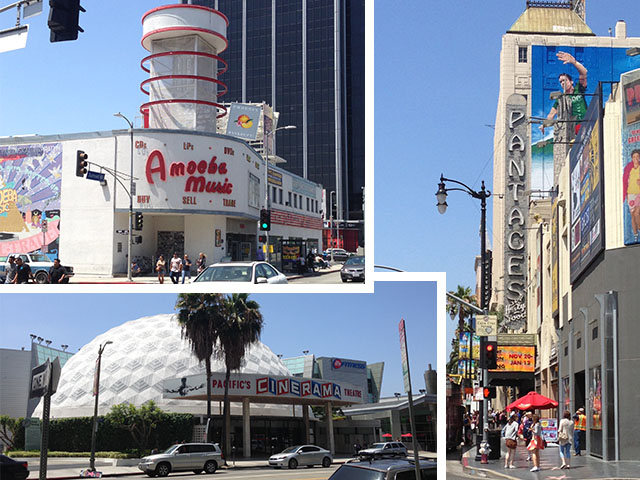 Amoeba, the Dome, and the Pantages (Photos by Matthew Tinoco)

Although Hollywood and Broadway really aren't that compatible, the Pantages Theatre provides a bit of crossover ground where some of the largest Broadway shows can take the stage here in L.A. Productions like Wicked, The Book of Mormon, and Catch Me if You Can have all run there in the past. Tickets aren't inexpensive, but it never fails to disappoint, and is itself a beautiful work or art-deco architecture itself. Check out the theatre's website for more information on what shows run/when/how much. The Wizard of Oz is going to be the Pantages' first production of its 2013-2014 season, starting on September 17th.

If you haven't been to Amoeba Music you're missing out. There I said it. But Amoeba Hollywood is the largest independent music store in the world. Regardless of what your taste in music taste is you will be able to find something inside the enormous store that you like. Los Angeles Magazine even voted Amoeba the greatest thing about L.A. a couple years ago too! Amoeba is also known for providing free concerts to storegoers. The store's calendar will provide information on who's playing when, but be warned—the line to get in can sometimes wrap around the block!

Directions: Exit the Red Line at the Hollywood/Vine Station, and try to use the Vine Street exit. Walk south along Vine until you reach Sunset Boulevard. Cross Sunset and turn Right. Amoeba is located at the corner of Sunset and Cahuenga at 6400 W. Sunset Boulevard.

Nothing says Hollywood like the Cinerama Dome movie theater. The theater, presently operated by Pacific Theaters, has an established history of being one of the flagship first-release theaters in Tinseltown. The Dome offers a prime selection of movies to see, popcorn to eat, and previews. Check out ArcLight's website for a list of shows and times.

Directions: Exit the Red Line at the Hollywood/Vine Station, and try to use the Vine Street exit. Walk south along Vine until you reach Sunset Boulevard. Cross Sunset and turn Right. The Dome is located at 6360 W. Sunset Boulevard, right next to Amoeba. 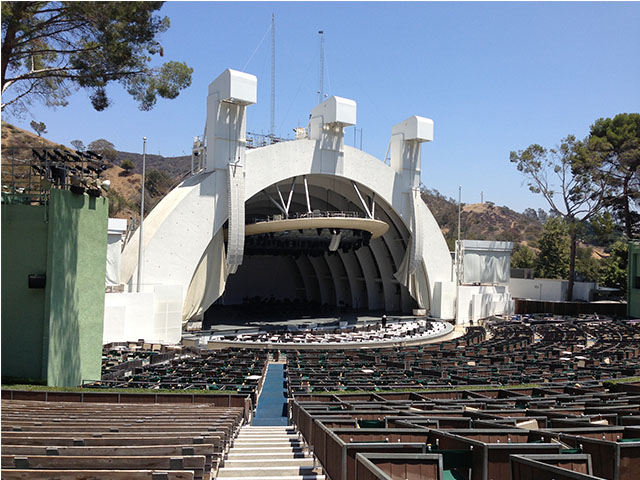 Easily the most iconic venue in Los Angeles, the Hollywood Bowl never fails to leave performance goers with a sense of wonder and appreciation for both the natural beauty of Los Angeles' natural setting and the talent of the musicians on stage. The Bowl's location in the Cahuenga Pass allows concert-goers to feel separated from the rest of the city. The Bowl's online calendar will help you select an event if you haven't been yet this summer. In the past, I've viewed the likes of the Arctic Monkeys and TV on the Radio at the Bowl, as well as John Williams 'Maestro of the Movies' spectacular (scheduled for late August, grab your light sabers!). Also performing later this year is Vampire Weekend. If you've never been to the Hollywood Bowl, make a point to visit before the end of the summer concert series. It's a true Los Angeles experience. 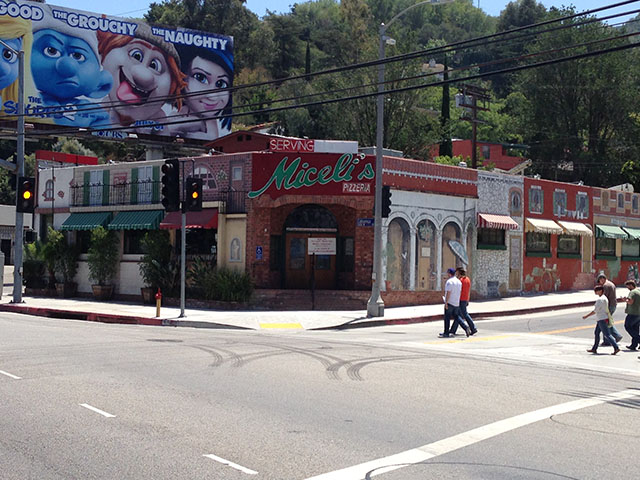 Miceli's Pizza is a quaint, cozy restaurant located just south of the Universal City Station on Ventura Boulevard. The restaurant, which specializes in Italian food, comes fit with live music inside too, consisting usually of an opera singer and accompanying piano player. All the waiters are capable singers, often adding their own tones to the performance. The restaurant's atmosphere is relaxed and the lighting is low, making it a good spot for a date. The food is quite tasty, and portion sizes are generous leaving you very full and a delicious lunch for the next day. Check out the restaurant's menu online, at their website.

Directions Exit at the Universal Studios/Studio City Station through the Lankershim/Bus exit. Walk south along Lankershim towards Ventura, passing under the Freeway. Cross Ventura and turn left (crossing Lankershim too). The restaurant is just about a block to the east of the intersection at 3655 Cahuenga Boulevard. 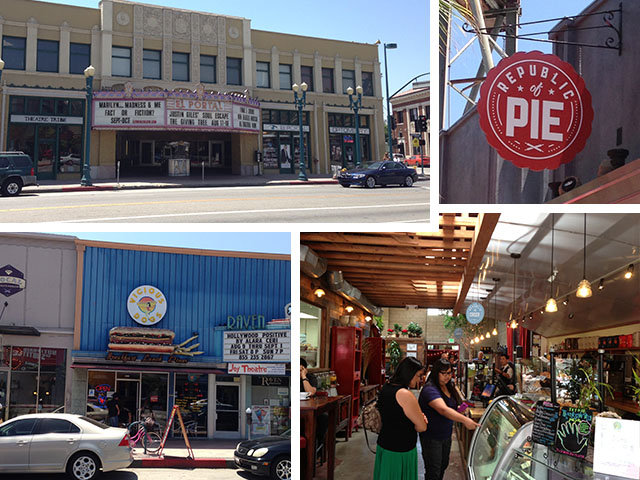 The Republic, Vicious Dogs, and the El Portal Theatre (Photos by Matthew Tinoco)

Give the Valley a chance, and you can find some really cool things here! The area around the North Hollywood Red Line station has been undergoing revitalization for the past 15 or so years, resulting in a district today filled with galleries, theaters and eateries. Take a jaunt over to Vicious Dogs where you can find, what are easily, the best Hot Dogs in L.A. County (Not Pinks, Carneys, Cupids etc.). Try the sweet and spicy dog. I usually wrap them in bacon too, but each to his/her own taste. If you're in a dessert mood, The Republic of Pie offers you an almost infinite selection of pies. The banana cream pie is perfect. But don't overlook their other options, including a slew of fruit, cream and meat pies. The Republic doubles as a lunch spot and cafe, offering a variety of coffee options and 'single-serving' sized pies.

The neighborhood is home to the most extensive theater district in Los Angeles. More than 30 independently-operated theaters, like the El Portal Theatre picture above, find their home in North Hollywood, each with their own distinct production style. Check out the NoHo Arts district website for more information on productions throughout the district.

Directions: Exit the subway at the North Hollywood Station. The bulk of the arts district is along Lankershim and Magnolia, to the south of the station. Walk around, and see what you can find! Vicious Dogs is located at 5231 Lankershim Boulevard, The Republic of Pie is located at 11118 Magnolia Boulevard.

Matthew Tinoco lives in North Hollywood and studies journalism at USC. He is usually found on a bus, train, or bicycle. Follow him on Twitter: @onthatbombshell