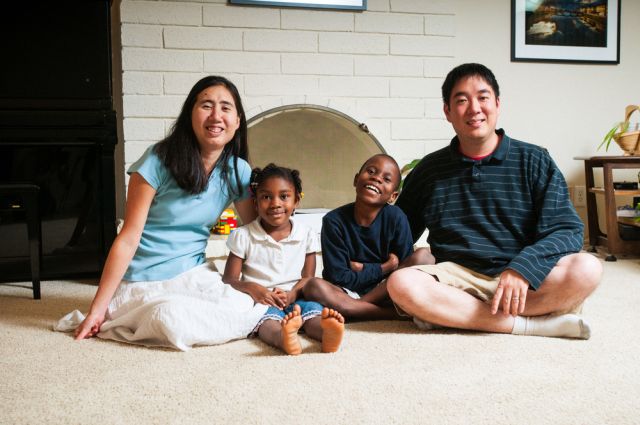 Matthew and Grace Huang with two of their adopted children, including Gloria. The Huangs have been charged in Gloria's death. Photo courtesy of freemattandgrace.com

A Los Angeles couple has been jailed in Qatar since January 15 and are accused of intentionally starving their adopted daughter to death.

Matthew and Grace Huang were arrested by Qatari authorities shortly after their 8-year-old daughter, Gloria, died from complications of malnutrition. She had not eaten anything in four days.

A number of websites and rights groups, including the California Innocence Project, have accused Qatari authorities of unjustly arresting the Huangs and using false claims and shoddy science against them. An initial report by authorities in Doha has suggested that the Huangs "bought" their children and were intentionally starving them to harvest their organs and sell them on the black market, according to Al-Jazeera.

Gloria suffered from a number of eating issues that were likely the result of extreme poverty she endured in her native country of Ghana, according to the couple's website, freemattandgrace.com. Gloria was known to repeatedly refuse food and go for days without eating, and the Huangs were working with her and helping her overcome it, according to the website. In a report by Dr. Janice Ophoven, a pediatric forensic psychologist who reviewed the case, Gloria's behavior was fairly common for a child who had suffered severe malnutrition in the past.

Gloria also was reported to have been treated for an intestinal parasite in the past, as well as having dangerously low amounts of a certain while blood cell that could have been a tell-tale sign of a bone-marrow condition, according to the Huffington Post.

Supporters of the Huangs have speculated that the unusual nature of the family - the Huangs are Asian-American and their children are all adopted from Africa - aroused suspicion from local authorities, who were not aware of American practices of international adoption. While building their case against the couple, Qatari authorities have questioned why the Huangs did not adopt "good-looking" children with the same "hereditary traits."

The Huangs moved to Qatar in late 2012 so Matthew, a Stanford-trained engineer, could work on a number of projects related to the upcoming 2022 World Cup.

The Huangs have been jailed on a charge of murder with intent and are currently awaiting trial. If convicted, the couple could face the death penalty. Their two remaining children have been barred from leaving Qatar.