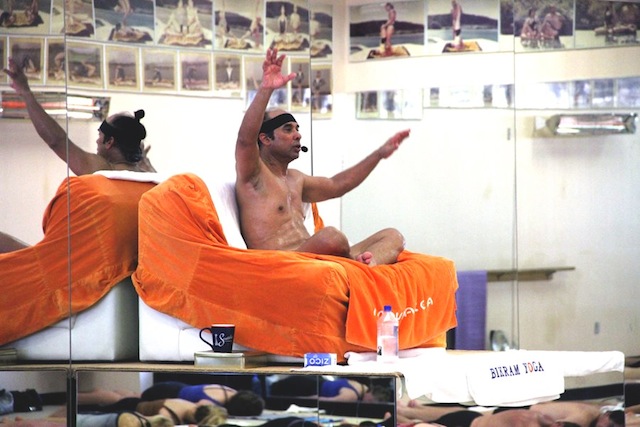 The man who founded Bikram Yoga—the Los Angeles-based, wildly popular "hot" form of the exercise that celebrities and presidents have practiced—is facing allegations of rape and racism from a former employee and more than one student.

Bikram Choudhury ran his company "like a cult," a lawyer for a former employee told The Huffington Post.

Carla Minnard says her client, Minakshi Jaffa-Bodden, was one of the few to stand up to Choudhury, who then reportedly threatened to have her client and her 8-year-old daughter deported. Minnard called the yoga guru "a dangerous person."

Jaffa-Bodden was a legal advisor at Bikram's Yoga College of India, which has locations all over L.A., including SIlverlake, Glendale and Pasadena. She filed her lawsuit on June 13 and accuses him of rape and sexual assault as well as promoting an atmosphere of misogyny, homophobia, and racism.

The lawsuit claims that Choudhury referred to female employees and others as "bitches," frequently went on rants against gays, and discriminated against African-American students, allegedly saying, "these blacks just don't get my yoga."

As Bikram's legal advisor, Jaffa-Boden learned of several allegations of sexual harassment by female students and was told it would be "best" if she "not look into it any further," the lawsuit states.

She claims her attempts to follow up were met by threats of violence and that she was forced to resign in March 2013.

"She did try to stop what she felt was illegal, immoral conduct," Minnard told The Huffington Post.

Two other lawsuits alleging sexual assault were filed in May against the guru. According to the IB Times, two female students accuse Choudhury of rape, with one also accusing him of false imprisonment, discrimination and harassment, among other counts.

Choudhury and his staff have not commented on the allegations, but the president of Bikram's college, Petra Starke, posted to Bikramyoga.com in May that her boss is "disappointed in the false charges made in this lawsuit. However, the matter is in the hands of his attorneys, and he will not have comment at this time."

For a profile piece in May in the L.A. Times, a staffer visited him at his La Cienega Boulevard studio and described the 67-year-old guru as someone who constantly name-dropped the celebrities he's "saved" (including Shirley MacLaine and Jennifer Aniston) and that three presidents—Clinton, Reagan and Nixon—were his students.

"He climbs onto a chair perched like a throne on a large mirrored cube, and dons a headset," the Times said of his teaching approach. "His introduction ranges from the compassionate to the profane, from the incomprehensible to the profound. Now, he is a soulful Indian. Now, an abuse-spewing Hollywood executive."

Senior Bikram teacher Emmy Cleaves, Choudhury's, one of his first students in Los Angeles, told the Times, "Sometimes he uses a little profanity. He never did that in the early years. He learned a lot of that from the show-biz people. He thought that was America."

In a 2012 LA Weekly article, Choudhury was quoted as saying, "Lady Gaga listens to me. Her mantra is only one word—Bikram—because Bikram makes her what she is today. It works."

"I kind of run this city," he told the Weekly. "They depend on me."

In his new book Hell-Bent about his pursuit of "extreme yoga," author Benjamin Lorr described Choudhury as "an overgrown child and chronic liar with a penchant for emotional abuse."

There are now thousands of Bikram-trained instructors teaching at studios all over the world, according to the Weekly.