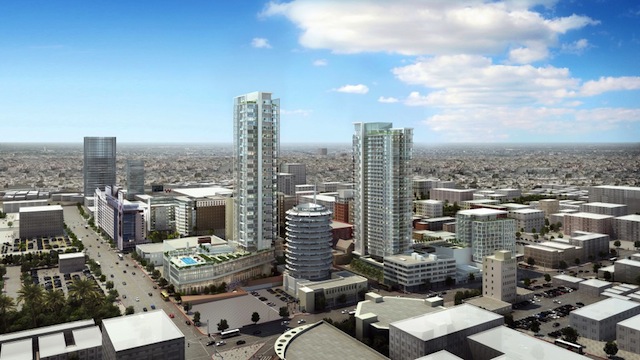 Opponents of the proposed Millennium Hollywood Project, which would erect two skyscrapers beside the Capitol Records Building, are claiming that there are serious safety concerns, including whether the two towers would be built on an earthquake fault.

Robert P. Silverstein, the environmental attorney advising more than 40 community groups opposing the project said today via press release that state investigations into two engineers who were responsible for the project's geotechnical and seismic reports are "red flags."

"These are devastating developments for the project," Silverstein said. "These are red flags that should warn Los Angeles City Council members that it would be incredibly irresponsible and possibly criminally negligent for them to approve the Millennium project as it is now planned."

He has filed an official complaint against two engineers responsible for reviewing the project, claiming they hid potential earthquake risks. He insists there has been a pattern of "developer fraud" that [has] "given the public and the City Council an incredibly false picture of the earthquake risks of this project."

The City Council is scheduled to vote on the Millennium Hollywood project Wednesday.

In June, the council's Planning and Land Use Management Committee approved the project, which includes two towers—one 35 stories, one 39—housing 461 residential units, 254 hotel rooms, more than a quarter million square feet of office space and 80,000 square feet of retail space.

The original proposal called for two towers that were 55 stories. Mayor Eric Garcetti's office issued a statement today: "Mayor Garcetti did not support this project at 55 stories and made that clear to the developer. Since then, the project has been reduced in height, more open space has been included, and other concerns have been addressed," adding that it would continue to monitor input from the community.

Since the state's study of the Hollywood Fault won't be completed by the end of the year at the earliest, Silverstein said that a letter saying as much from the State Geologist "makes it clear that the city is on very shaky legal ground if it goes ahead with this project before the state's studies are completed."

Reaction to the project has been strong, with (with one blogger quoting Charlton Heston from the disaster movie Earthquake: "We should have never put up those 40-story monstrosities!" StopTheMillenniumHollywood.org claims, "The Millennium Project's EIR [Environmental Impact Report] contains fraudulent data that could cost lives as well as collapse our already-delicate infrastructure."

Philip Aarons of Millennium Partners released this statement today to LAIst in response to Silverstein's allegations:

The allegations regarding the environmental review of the plans for Millennium Hollywood that were raised today by attorney Robert Silverstein are false. Mr. Silverstein is well known for litigating against numerous developments in the Hollywood area.

The charge that our project site is located on the Hollywood Fault is refuted by the extensive geotechnical investigations that were conducted at the request of the city.

The only subservice investigation done to date at this location was completed in connection with the project and found no evidence of an active fault on the project site.

The findings give us complete confidence that our project site is safe. To provide further assurance, the project EIR contains mitigation measures that require a final geotechnical report, to the satisfaction of the city's Department of Building and Safety, before the project can be built.

We have always understood that the state may further investigate the location of the Hollywood Fault and we welcome such investigation. However, it is important to note that the most important data is the site-specific investigation that has already been undertaken. No amount of bluster on Mr. Silverstein's part changes that data.

Millennium Partners have spent the last six years working on our development and have had numerous discussions with community stakeholders during that time. Much of their input has been incorporated into our plans, and we are appreciative of their participation.

We firmly believe that this project will be a positive addition to the Hollywood community and bring enormous economic benefits to the area and city as a whole, including the creation of 2,900 jobs during the construction process, and look forward to Wednesday's City Council hearing on our proposal and what will hopefully be a positive vote in its favor.