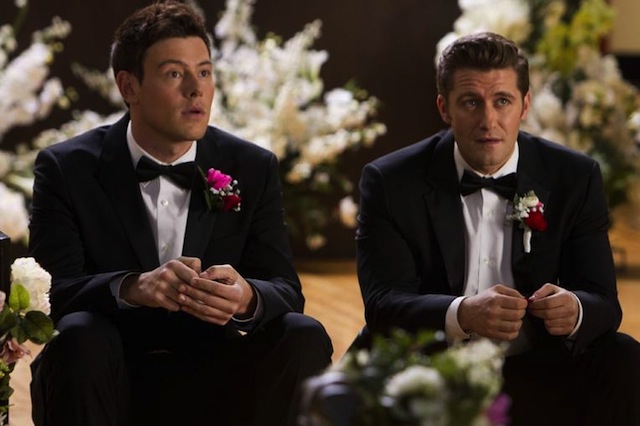 Cory Monteith and Matthew Morrison in the "I Do" episode of Glee. (Photo courtesy of Fox.)

The writers of Glee are scrambling to deal with the sudden death of Cory Monteith since production was slated to begin on the fifth season in less than two weeks.

The writing staff of the Fox show reportedly held an emergency meeting today to figure out how to handle the loss of one of the show's main characters, TMZ reports.

There's no talk of canceling the series, since Monteith's character Finn was just one of a huge ensemble cast, but he did have a major arc planned for the upcoming season, according to TV Guide's Senior Editor, Will Keck.

A source told TMZ, "No decision has been reached about a script yet, as it's still early."

Last season ended with Finn and Rachel (Lea Michele) split up but on good terms. He had also patched things up with Will (Matthew Morrison), after their feud. Finn was left out of the season finale because Monteith was in rehab.

E! Online is reporting that the show planned to add two new characters, a plan that was in place before the star's death.

"Everyone is in shock," a source who works on the show told E! News. "To say that Cory was much loved on the Glee set doesn't even begin to do him justice."

Fox released a statement on July 14, saying, "We are deeply saddened by this tragic news. Cory was an exceptional talent and an even more exceptional person. He was a true joy to work with and we will all miss him tremendously. Our thoughts and prayers are with his family and loved ones."

The show had been set to return on September 19. No word yet if the fifth season will be delayed now.

Dianna Agron, one of the original cast members of Glee released a statement today to Us Weekly mourning the late actor.

I have never lost a friend. In this difficult time, I am leaning on all of the wonderful memories we shared with Cory, how many ways he was able to make us smile. Glee was a gift to all of us. It gave us a family in this industry.

We really cut our teeth and grew up on this show. In playing underdogs, we learned that we had dug into the hearts of our viewers and that we could stay there. Cory is so deserving of that place in everyone's hearts. He was one of the most generous and kind people that I have ever met. He had a smart, curious mind, he was an enormous talent. He was loving to not only me but my family.

My heart goes out to his family, to Lea, to everyone that is struggling with the loss of our friend. We will miss you Cory. We will always carry a piece of you with us.

Agron played cheerleader Quinn Fabray, Finn's first love interest. She went from a regular to recurring after her character graduated in the third season.

Monteith was reportedly cremated yesterday in Vancouver following a private viewing with his family and girlfriend Lea Michele.

UPDATE, JULY 19, 6:00 p.m.: Fox has released a statement that the fifth season of Glee will be delayed because of Monteith's death.

"In light of the tragic passing of beloved Glee cast member Cory Monteith, the series' executive producers, 20th Century Fox Television and Fox Broadcasting Company have jointly decided to delay the start of production of Glee until early August. No further details are available at this time."