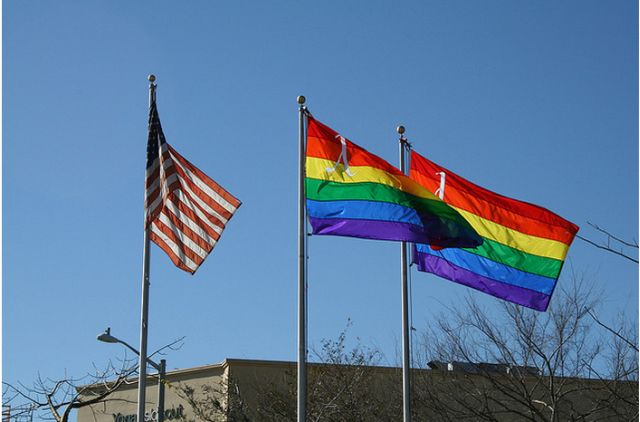 Photo by ccharmon via the LAist Featured Photos pool on Flickr

With the striking down of a key part of the Defense of Marriage Act (DOMA) and the repeal of Proposition 8, California once again finds itself at the forefront of the gay rights movement. Given these recent developments, it is high time for Angelenos to brush up on their LGBT history. Fortunately, the good people at Out and About Tours, L.A.'s premier LGBT tour company, have partnered Up with L.A. Tourism and put together an exciting and comprehensive car-free and guide-less tour that takes you through L.A.'s fascinating gay history. The tour is part of a comprehensive eco-tourism plan by the L.A. Tourism and Convention Board called Car-Free L.A., which aims to get people to explore and discover the city via foot, bike or Metro,

FIRST STOP
The first stop on the tour takes Angelenos back to their roots: The El Pueblo de Los Angeles monument near Olvera Street. L.A.'s most famous and historical outdoor marketplace was once home to the Tongva, who settled in the area centuries ago. The Tongva were light-years ahead of the incoming settlers in regards to equality; they accepted homosexual and transgendered people and believed in the concept of the "two-spirit", a revered name given to homosexual members of their tribe.

SECOND STOP
The second stop on the tour is the historic Merced Theatre, located at 420 North Main Street. A stately and ancient theater in the same area as Olvera Street, the Merced has played host to a number of different venues and events. But many Angelenos do not know that the Merced was actually one of the area's first adult theaters, opening up during the turn of the 19th century.

THIRD STOP
The third stop on the tour is, of course, Los Angeles City Hall, where all the legislation regarding LGBT rights in the city originated. City Hall was also home to the Municipal Elections Committee of Los Angeles (MECLA), a pro-LGBT fundraising outfit that sought to combat the infamous Briggs Initiative, an attempt by bigoted lawmakers to ban gays and lesbians from working in public schools.

FOURTH STOP
It is here when the tour takes a walk on the seedier side. Located at 132 East 4th Street is the Klyt Bath House. Opened in 1902, the bath house was the first of its kind in Los Angeles, attracting thousands of men and closeted celebrities from all over the region. From the nondescript location to the broken sign out front, Klyt is the place to be for a night of pure debaucherous fun.

FIFTH STOP
After spending time at Klyt, a good dose of class should be in order. The Millennium Biltmore Hotel, located right across the street from Pershing Square, is the next stop on the tour. The hotel was the site of a massive paradigm shift in how the scientific community treated gays and lesbians. In 1971, the International Psychologists and Psychiatrists conference convened at the hotel with a plan to declare electroshock therapy at the official "cure" for treating homosexuality. The meeting was disrupted by throngs of activists, who started the dialogue that eventually led to the American Psychological Association removing homosexuality as a mental illness.

SIXTH STOP
Further your appreciation for LGBT history by visiting the ONE National Gay & Lesbian Archive, located on the USC campus, which is just a short ride on the Expo Line from the 7th Street/Metro station. The archive is a permanent record of the struggles and victories that dotted the 20th and 21st centuries. The archive also serves as Downtown L.A.'s gay community center and also hosts art events and cinematic screenings.

SEVENTH STOP
You'll be heading across the city for this next stop at The Village at Ed Gould Plaza in Hollywood. Just a few blocks south of the Hollywood and Highland Red Line station on Santa Monica Boulevard, the Village is a place where L.A.'s gays and lesbians go for legal advice as well as entertainment. The Village has galleries and exhibits that are absolutely free and open to the public, as well as a top notch theater program that boasts an all-star LGBT cast.

NINTH STOP
Finally, the last stop on the citywide tour is the second branch of the ONE Gallery Archives and Museum at 626 Robertson Boulevard. Like its sister location on the USC campus, the ONE Gallery houses a massive selection of over two million historical items and a rotating collection of fine exhibits that tell the stories of the activists that came before us.

Given the overwhelmingly positive response to the repealing of Proposition 8, this tour is sure to be a hit with Angelenos who would like to experience an intriguing and vital part of their history firsthand.

More information about the tour can be found here.

Editor's note: This post has been updated to include additional tour information.