The Best Tacos in Los Angeles

Let the rest of the culinary world swoon over modernist foams and those scavenging Scandinavians. The simple pleasures of the taco suffice in Los Angeles. Transcending the borders of mere marinated meats, caramelized vegetables, hand-spanked tortillas and motley salsa spreads, here the marriage of these ingredients gets shaped into a point of civic pride, idol of cult (and now mainstream) obsession and de facto dietary staple. So who needs reservations and white tablecloths when there's always an open curb, composite countertop or plastic picnic table with your name on it? Step on up to find ten of L.A.'s best tacos. 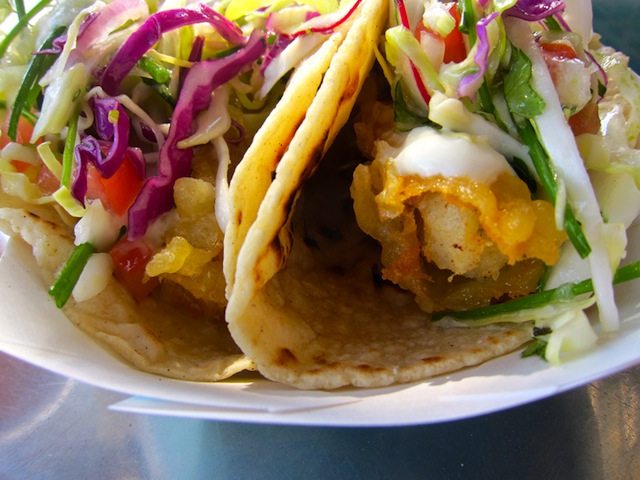 Fortified in a bright and tidy abode skirting Chinatown, Esdras Ochoa and Javier Fregoso originally introduced their Baja-sourced tortillas, hand-chopped and flame-fired asada, and small-batch salsas to a clandestine corner of a downtown block. They sent smoke signals from the street that would eventually find Mexicali the twice-crowned victor of L.A.'s "Taco Madness" tournament. Come for the superior meats and acquire unexpected new addictions for well-crafted cachetadas topped with chipotle aioli, garlic-glutted quesadillas vampiros and triple-meat Zuperman tacos, rarities to our region that keep us returning.

Leo's embodies everything there is to love about Taco Town. An unremarkable parking lot at a Mid-City gas station turns into a daily destination for gastronomic greatness. A true artist takes to a revolving trompo (spit) to surgically shave and nick shingles from a dry-rubbed, chile-shaded alloy of pork loin. A nightly crush of cars and characters crams in for the resulting $1 packages of perfection.

Leo's is located evenings on the northwest corner of La Brea Avenue and Venice Boulevard, Mid-City.

Pig out on Saturdays and Sundays at this Highland Park restaurant named after an underground Mexico City train station, where few parts of the porker are ignored among a staggering selection of carnitas. Expect to encounter eight of Porky's parts, including approachable ribs and ubiquitous maciza (pork butt), as well as the "Bizarre Foods"-worthy snout, skin, ear, and pig uterus tacos. That's right, pig womb, a cut that was also cherished by ancient Greek gourmands, though we bet they had to pay more than the equivalent of two bucks for a taste.

The résumés of Supper Liberation Front chefs Josh Gil and Daniel Snukal are littered with big names like LudoBites, BLT Steak, Urasawa, and Joe's. So it's not such a surprise to see that the stripped-down menu at their new Santa Monica taqueria still blows doors off of their hinges. Start with the chefs' battered fish tacos, starring super-fresh cod coated in an ethereal, lacy-edged tempura skin and citrus-kissed pickled cabbage in the kitchen's own hand-shaped tortillas. 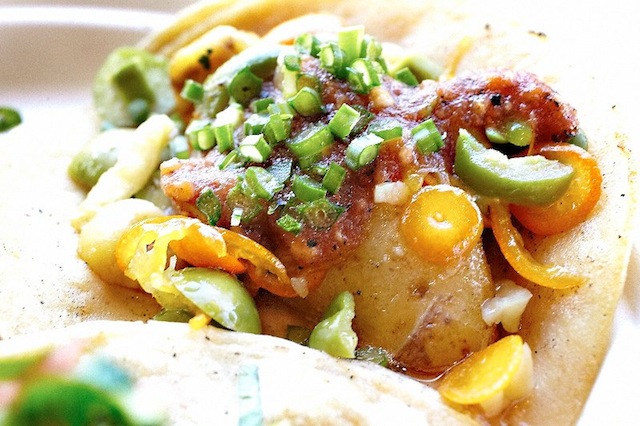 Despite his beard and brawn, Wes Avila is like the Alice Waters of tacos. There is no market ingredient he can't coax into compatibility between a tortilla, giving taco-freaks newfound affection for the flavors of celery root, pistachios, burnt tomato, cauliflower, artichoke, chestnuts, green beans and grilled peaches. Or maybe the dude is more like the Jon Shook of tacos, slipping sweetbreads, lamb tongue, oxtail, spare rib, lobster tail and wild salmon onto his plancha. Uncategorizable and unpredictable, Avila is actually nothing but his own focused animal, a singular force making the most distinguished tacos in L.A. today.

Before many Angelenos tailed loncheras (food truck en español) and staked out street corners, they were chowing down on the hard-shell, ground-beef, cheese-bombed tacos that have made bazillionaires out of Taco Bell. West L.A.'s lionized Tito's not only upholds this school cafeteria staple with pride, but is perpetually packed with longtime lovers lined up to score their own cardboard box that teeters with stale tortilla chips and any number of enjoyable, nostalgia-stroking "gringo" tacos.

Tacos are less a fixture of actual authenticity than an ever-evolving language. It took a Colombian invasion to Mesoamerica to introduce the animals necessary for Mexico's beloved asada and carnitas, Japanese fisherman to pave the way to Baja's beer-battered seafood tacos and Middle Eastern migrants to Mexico to inspire al pastor and tacos arabes. Roy Choi legendarily leant Korean influences to this lexicon with his inventive short-rib taco. Despite the Taco Truck Tower of Babel that followed in the fumes of his Kogi truck, Choi's contribution to Tacodom is engraved in granite, having given L.A. its own indigenous permutation and the rest of the world the phenomenon forever known as the "Korean taco."

Kogi can be found citywide by following the trucks online. 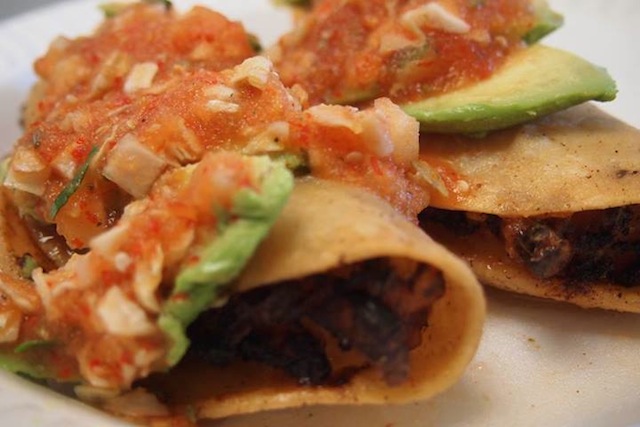 First your incisors come into contact with the cool cream of sliced avocado lurking just under a thin coat of red salsa, confettied with onion, cilantro scales, and piquant pepper seeds. Then the fried corn tortilla shell easily splinters, unleashing a piping hot burst of snappy, spicy and seasoned midget shrimp. The ballet of back-and-forth textures, temperatures, and flavors stands as an unrivaled paragon of taco engineering and is definitely worth the drive to experience, no matter where you reside.

There are juicy tacos to be found around town, and then there is Guisados, gracing its handmade tortillas with a cast of the spice-addled braises from which it takes its name. This is the place you go to feel the persuasive pull of varied regional Mexican sauces and spices like tinga, picado and pibil, found among the numerous options available in the two restaurants' tiny tacos. Iron tongues can ratchet up the heat to sadistic degrees, putting cojones on the chopping block with an order of the infernal tacos chiles toreados.

Want to feel good about this habit you have of stuffing your face-hole with oh-so-many-tacos? Head to downtown's Homegirl, where your money will bolster at-risk Angelenos taking a turn away from gang-life and find your soul satisfied by hyper-fresh, handmade Mexican food with a healthy slant. Even tacos with carnitas and chicken mole burst with garden bounty, but chef Pati Zarate's delicate touch is best expressed by her vegan "Jorja's Taco," centered on sautéed hibiscus flower and topped with creamy avocado, sweet caramelized onions, cucumber, cilantro, and the slight sting of Serrano.

Hadley Tomicki lives in Mar Vista and will work for tacos. He is a co-founder of L.A. Taco and his work can be seen in Time Out, Grub Street, and Entree Travel Newsletter.