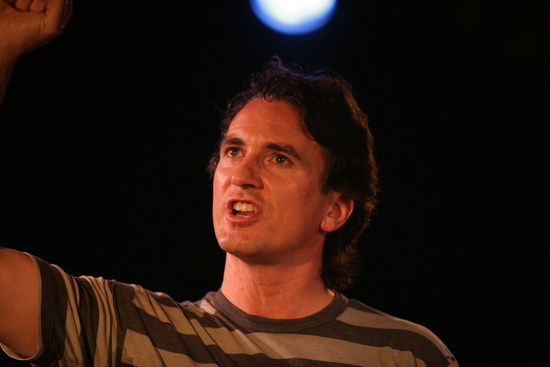 Antonio Sacre (monologist, story-teller, writer, and solo performer extraordinaire) has revived and revamped his one-man show, Let Them Eat Meat at the recently launched Solo Collective, a theatre company dedicated to single-performer plays. The work tells intricately woven stories of Sacre's family, both admirably noble and hilariously crude alike. Spanning generations, time, locations, and genders; the entire Sacre clan is rendered through a carefully constructed narrative of multi-faceted perspective that is as endearing as it is entertaining.

Let Them Eat Meat depicts the humble beginnings of Sacre of his brothers as they grew up in Boston among their Irish and Cuban family. Focusing on the fall and eventual heart-warming rise through life of Sacre's younger brother, the script works itself out like an autobiographically-twisted family tree. While in many ways standing as a totem for all families borne out of common, all-forgiving eccentricity, Sacre channels his brothers as seen through the eyes of their elders to tell a story that is full of circumspect authenticity, loving homage, and luck-filled cadences.

For Let Them Eat Meat, Sacre is both actor and playwright: He genially rolls out character after character, defining key moments and relations through distinctive tones, accents, and postures. The Let Them Eat Meat stage, set as a working bar, increasingly fills with creative breadth, vivid memories, and familiar warmth. Sacre actively engages his audience through a masterful command of meaningful meta communication and his gentle, instinctive sense of humor.

Under the direction of Paul Stein, Let Them Eat Meat, is precisely calibrated to cull empathy and a rare, comfortable fellowship between artist and audience. The production set in a set is utterly detailed and echoes Sacre's welcoming nature.