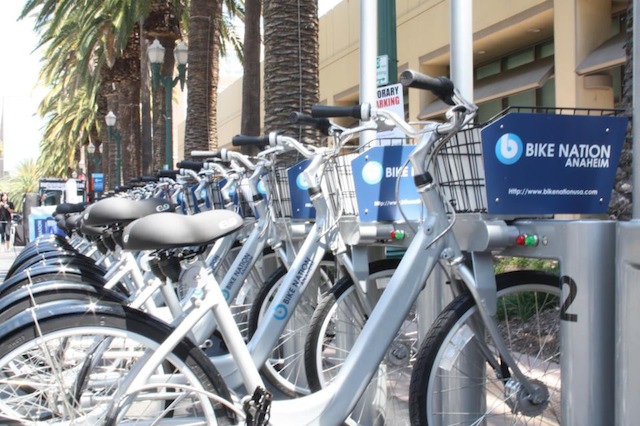 There's a bump in the road for the company that is rolling out Los Angeles' first bike-sharing program. Bike Nation said it was hoping to roll out its program this summer, but Angelenos are going to have to wait a little longer for the program that is similar to New York City's Citi Bike program.

The issue boils down to how the program will be paid for. Users swipe a credit card to check out of bike from a kiosk, and these fees help to pay for the bikes, but they don't cover all the costs. That's why these bike-sharing programs have turned to advertising, like CitiBank in NYC and Blue Cross and Blue Shield of Minnesota in the Twin Cities.

The problem here is that the city has a contract with CBS Outdoor and JCDecaux that gives them the rights to sell advertising through 2021 on "street furniture," including bus stops, public toilets and newsstands, according to the Los Angeles Times. Bike Nation knew about this contract but they thought they would be able to reach a compromise since the contract doesn't mention bike kiosks specifically.

Bike Nation Chief Operating Officer Derek Fretheim told the Times that they were hoping that the French company JCDecaux might be sympathetic to their cause since they sponsor a bike rental program in Paris that relies on advertising revenue. But that hasn't happened yet. CBS has said it supports

The company hopes Eric Garcetti will interpret the city's contract in a more favorable way, but in the meantime, they're looking for corporate sponsors to help them kick the bike-sharing program into gear.