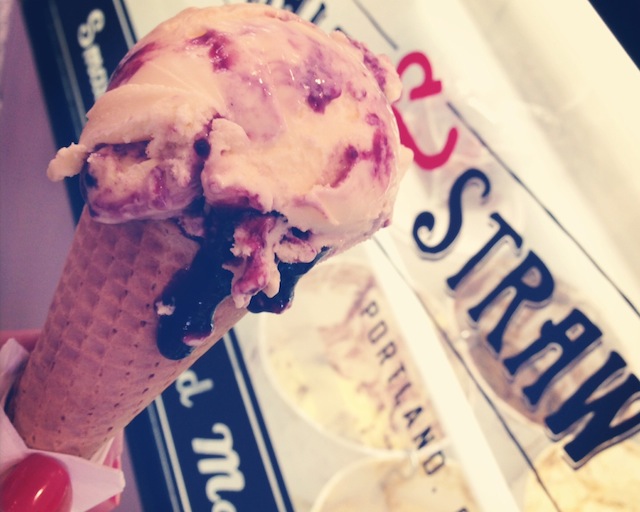 Cousins Kim and Tyler Malek have garnered quite a bit of attention with their Portland-based creamery, Salt & Straw. Their small-batch seasonal scoops are creamy and dreamy, and it's always on the top of agenda on trips to the Northwest. So it should come as no surprise that the second we heard that they'd be serving up scoops at Joan's on Third, we high-tailed it over.

The duo has brought six of their classic combos—including our favorite sea salt with a caramel ribbon and cinnamon snickerdoodle—to a small stand that sits beside Joan's epic pastry case. But they've also crafted a new flavor just for the L.A. audience. No, it's not some low-fat kale concoction; it's a meyer lemon buttermilk custard with ribbons of blueberry jam. And it's a masterpiece.

"The markets are so inspiring in L.A.," says Tyler. "Vinny [Dotolo, chef at Son of a Gun and Animal] sent us over to Santa Monica, and we were just blown away. It's thrilling to see that you have that many fresh ingredients at your fingertips."

For Tyler, who handles R & D for the creamery, the lemons and citrus were of particular interest simply because they don't grow well in Portland.

"We wanted to echo the community and the environment and the sun with that bright flavor of the lemons," says Tyler. "The richness of the custard emulated that L.A. vibe so much."

Their nostalgic custard uses tart buttermilk from Alpenrose Dairy in Portland that contains 17 percent butterfat. That higher fat content plus the itsy bitsy amount of air creates the silky smooth texture that makes Salt & Straws scoops so special. It's the first time they've put a custard on their menus, and it's a real treat.

For now the Maleks are sharing time between Portland and L.A., hopping down every few weeks for research. One such project is a collaboration between the creamery and Michael Voltaggio. They'll be creating a loaded baked potato ice cream with the "Top Chef" champ for his visit during the upcoming Feast festival in Portland.

The loaded baked potato ice cream will come out in September and is made with bacon chocolate crumbs covered in chocolate, onion juice caramel, white cheddar cookie dough, and a potato ice cream base. It might sound too whacky to work, but the Maleks are no stranger to these sorts of wild flavor combos; they've worked with chefs from the Aviary, Beast, Boke Bowl and Ox on chef-driven flavors in the past that have been huge hits.

And in a town as obsessed with ice cream fusion as L.A., it just might take hold. We are home to Matthew Biancaniello's boozy ice cream pop-ups and epic beer float fests, after all. And Salt & Straw has been known to partner with coffee roasters, brewers, and distillers in the Portland area, of which there are plenty here in SoCal.

"Our dream would be to manufacture there," says Kim. "There's so much momentum around artisans in the food world in L.A. It's really exciting."