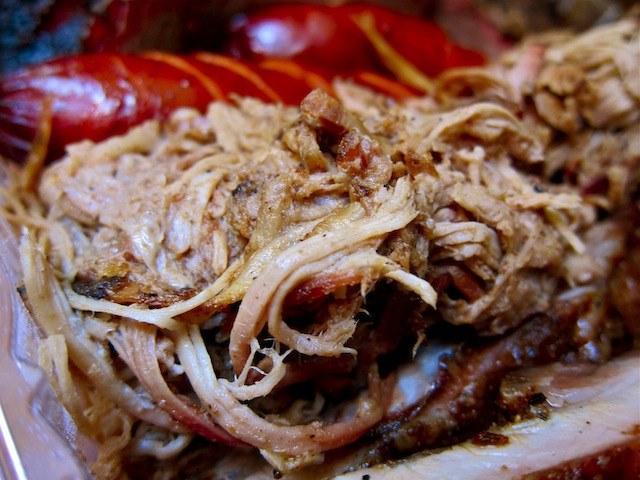 Pit master Neil Strawder cut his chops on the BBQ competition circuit, but thankfully he's taken a liking to serving up his smoked links, pig candy, and burnt ends at farmers markets throughout L.A. He and his wife Phyllis can be found slanging their "real good meat" at the Atwater, Century City, Downtown L.A. (Hope St.), and Torrance Farmers Markets, and now they're set to open their first brick-and-mortar shop in Downtown L.A.

The scene in the area seems to be ever-expanding; it's almost impossible to keep up with all the hot openings and artisan hubs opening in the area. The new location of BigMista's will be located at the Medallion building at 4th and Main streets in the Old Bank District, and has hopes of opening before the first of the year. To start, they plan on launching with breakfast and lunch, but they've got plans to serve their famous 'que during dinner hours as things move along.


The building is a project of John Edwards, head of Raw Inspiration, a company that runs 21 farmers markets around Southern California, including three in the downtown area.

Neil Strawder says the Bigmista's Barbecue spot will be just one of several restaurants and artisan food producers located in the project, which is planned to include a permanent farmers market as well.

Does that mean the newly-revamped Grand Central Market yet-to-open Horse Theif BBQ joint is going to have some competition? Most definitely so. But what it most certainly signifies is that the DLTA workforce and its uber-hip residents are about to reach a glut of good eats in their neighborhood, which is a great problem to have.

The Best BBQ in L.A.

The Best of the Vendy Awards