'Home: A Dramatic Improvisation' Brings Instant Awesomeness To The Stage 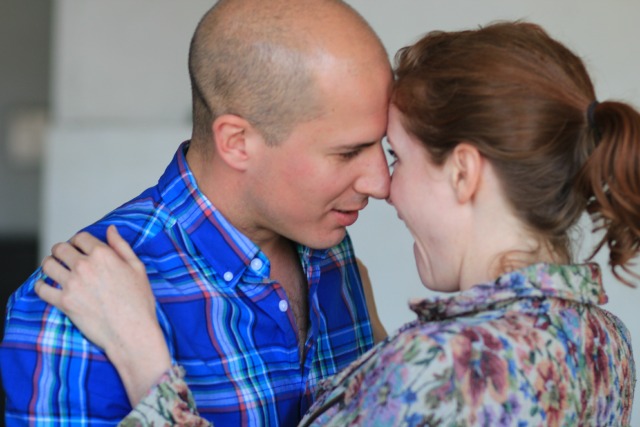 Needtheater's new theatrical experiment, Home: A Dramatic Improvisation, is playing at Moving Arts Hyperion Station. Unlike a standard stage play with memorized dialogue and blocking, Home is completely improvised. Originally conceptualized by Erica Elam and Jet Eveleth, the work does not have a traditional playwright. Every performance is essentially a new play with an instantaneously conceived plot loosely structured around a backstory of a close, but imperfect family. Home offers audiences an exciting, engaging, and surprised-filled hour of theatre that highlights interpersonal familial complexity through singularly unique performances.

Kate Duffy in 'Home: A Dramatic Improvisation' (Photo courtesy of Needtheater).
Elam, Eveleth, Kate Duffy, Ian Forester, Bret Elam, and Kristina Johnson — the ensemble cast of Home — is a risk-taking bunch that curates improvised plot quickly and instinctively to fully capture a sense of self-reflective realism. Superficially, the performance is a work with a solid, believable, and relatable improvised story line. The most striking element of Home is how heavily the cast captures significance through subcontext and meta-communication. The Home cast is like a living, breathing lens into which the intricacies of human behavior can be spied upon. Elam (Erica) is particularly full of surprises and constantly pivots the plot in unexpected directions.

Home has no traditional director as the cast self-directs while improvising. Their theatrical constructions feel and look perfectly natural. The pressure generated from making up a play on the spot is always redirected into a simmering, contagious warmth imbued with gravitas. The set for the production is simple, but does give the audience the sense that they are willing spies, and at times, voyeurs, into the lives of the central characters. What the production lacks in over-rehearsed polish, it makes up for in raw, gritty authenticity that is absolutely enjoyable.

Home: A Dramatic Improvisation is playing at Moving Arts Hyperion Station through June 25. Tickets are by donation and available at the door.