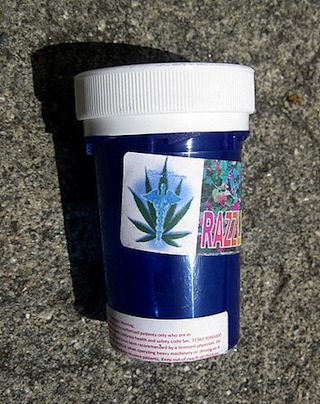 Medical marijuana (Photo by Lucyrk in LA via the LAist Featured Photos pool on Flickr)
It may be as popular as pizza, but pot can no longer be delivered in Riverside. That isn't stopping one driver, who says his services are vital.

Last week, the city banned all medical marijuana clinics from delivering to clients.

KCAL reports that several clinics are ignoring the ban and continuing to deliver as usual. The channel's Tom Wait did a ridealong with a driver who asked to be called "Kalonnie."

He and the one client who would go on camera expressed concern for what kind of deals they might have to do illegally if pot deliveries are stopped. "You can meet someone in a gas station parking lot,” says Kalonnie. “That might be the riskiest thing you could ever do.”

One of his clients, David Lopez, agreed home delivery is much safer: “It’s better to have it in your house than to drive all over, you don’t know neighborhoods.”

Riverside's city council argues the opposite, citing statistics that violent crime—like armed robberies—rise with any sale of pot, according to KCAL.

Kalonnie has refused to stop his deliveries, even though the new law goes into effect immediately. “It’s beneficial to the people. It’s safer than meeting some stranger off the street.” he insisted.

Attorney James DeAguilera, who represents about 15 marijuana collectives in Riverside, was doubtful of the efficacy of the new ban, telling the Associated Press, "Would Riverside set up checkpoints all around the city and have police confiscate marijuana? It doesn’t make a lot of sense.”

Kris Hermes, a spokesman for the medical marijuana advocacy group Americans for Safe Access, took issue with the ban, saying, "I think inevitably areas that are undergoing law enforcement measures will definitely be forced to travel longer distances to get their medicine or they will go to the illicit market or more tragically do without." He speculated that the new ban might lead to lawsuits.