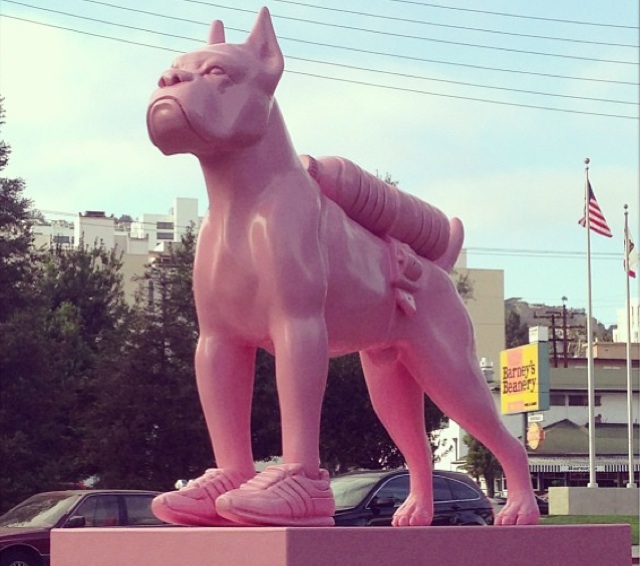 One of the six 'Cloned Bulldogs With Water Bottles' statues was stolen late Sunday night in West Hollywood. (Photo by dangersharkz via Instagram)

Someone has snatched one of the oversized pink bulldog statues along Santa Monica Boulevard.

West Hollywood Cultural Affairs Administrator Andrew Campbell confirmed to LAist that the story on WeHo News is true: One of their pink pooches got pinched!

"It disappeared sometime between Sunday night and Monday morning," Campbell said of the missing artwork, which weighs 200 lbs. "We're assuming it was stolen. Our hope is that someone just decided to pull some kind of prank and might be returning it shortly."

The statue was one of six just installed along a median on Santa Monica Boulevard before the Pride Parade on Sunday: Three dogs are red and three are pink. "It did happen that night," Campbell says of speculation that someone was seized with a post-pride penchant for their own pink pet.

"I was watching over them on Sunday. People were having a great time taking pictures with them," Campbell said. He was surprised that someone was able to make off with the heavy object, especially since it's surrounded by traffic on both sides. The statue was stolen from Santa Monica Boulevard between La Cienega and Olive, right by Barnery's Beanery.

The oversize statues of dogs wearing tennis shoes on their front paws and sporting water bottles on their backs are officially called "Cloned Bulldogs with Water Bottles." They're by Belgian artist William Sweetlove. Campbell says Sweetlove is offering a unique reward for the statue's safe return: A different collectible statue of a frog valued at $1600.

"If anybody out there knows anything, please contact the West Hollywood Sheriff's department," at 310-855-8850. Campbell told LAist. "Hopefully someone's conscience is acting on them and hopefully we'll get it back."

Per the city's pre-installation press release, "Sweetlove has been exhibited throughout Europe, in Israel, South America and in New York and Miami. This will be his first West Coast exhibit.... He spreads a vision of the world suffused with elements of irony and ecological awareness. ... He creates friction between the artificial and the substantial, completely obliterating the boundaries between toy and work of art in certain of his works. This is a world in which poodles, giraffes and penguins are rendered into artifacts which unite Dadaism, surrealism and pop art in a common post-modernistic synthesis."