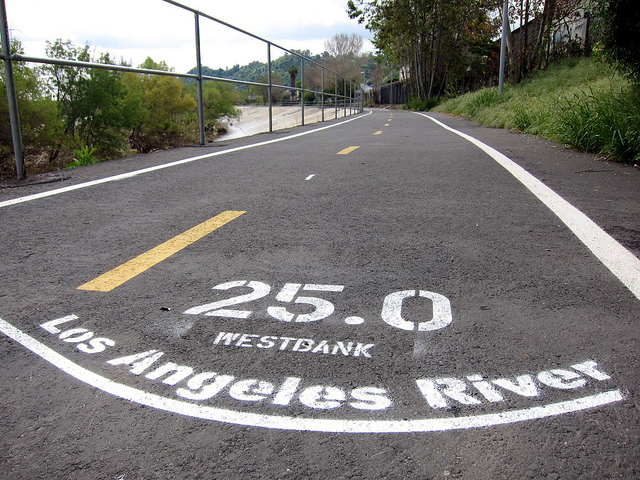 Bike path along the L.A. River in Elysian Valley (Photo by Eric Norris via the LAist Featured Photos pool)

A man participating in Los Angeles' annual naked bike ride was punched while he was riding along the Los Angeles River Greenway Trail in Elysian Valley.

The incident occurred at 4:40 pm on Saturday afternoon on the bike path along the L.A. River near Knox Avenue, according to a police report. Two suspects in their 20s not associated with the ride, one male and one female, yelled at the hundreds of nude bike riders coasting along the bike path to get out of there. The suspects walked up to a man, punched him and then left.

One glass bottle was thrown in the direction of the riders before the attack, according to an LAist photographer who was on the ride. Witnesses told the photographer that neither the victim nor anyone else on the ride retaliated against the assailants. Police said the victim in the attack did not even want to report the incident, but witnesses on the ride did report it to the LAPD Northeast Division.

There were few other details about the incident or suspect. Though several people on the ride had their phones out, we haven't seen any photos or video capturing the incident or identifying the suspects (that's a hint: if you have something, hit us up!).

This isn't the first time things got ugly on the L.A.'s World Naked Bike Ride. In 2011, riders were punched by angry motorists, called anti-gay slurs and injured in unprovoked attacks on the route in Echo Park. There weren't any violent responses to last year's ride, though the Elysian Valley neighborhood watch group asked that the "grotesque" event be banned.