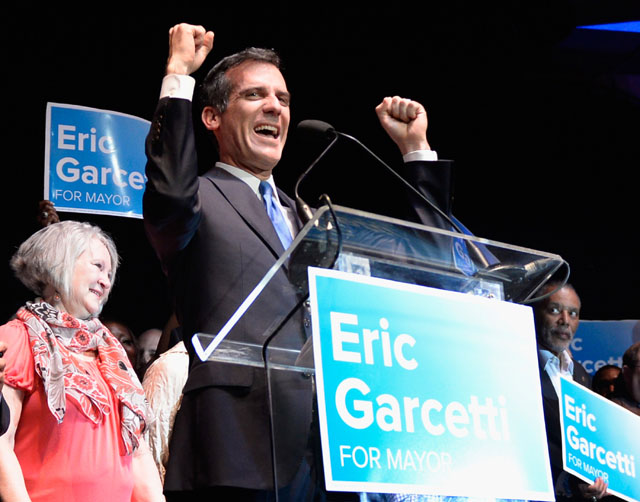 It's official: Eric Garcetti has won the race for Los Angeles mayor over Wendy Greuel, who conceded this morning.

With 100 percent of precincts reporting, Garcetti earned 54 percent of the votes and Greuel had 46 percent, ABC News reports.

Garcetti is both LA's first Jewish mayor and, at 42, its youngest mayor in 100 years, according to the LA Times.

He tweeted his thanks to the voters: "Thank you Los Angeles—the hard work begins but I am honored to lead this city for the next four years. Let's make this a great city again."

Thank you Los Angeles—the hard work begins but I am honored to lead this city for the next four years. Let's make this a great city again.

Last night, things looked too close to call, with both candidates appearing optimistic about their chances.

Although Garcetti and Greuel spent a record amount of more than $30 million in the race, poll turnout was a low, low 19.2 percent, according to the Times.

The two Democrats were in the run-off contest to succeed two-term Mayor Antonio Villaraigosa, who will leave office July 1.

The issue that Angelenos might care about more—Proposition D, which limits the number of marijuana shops in the city—passed with 63 percent of the vote.

Prop D will cap the number of pot shops at 135 and also raise taxes and limit hours of operation.

Two other medical marijuana proposals were also on the ballot: Ordinance E would have also capped the number of clinics at 135 but without new taxes. Supporters chose to back Prop D instead, leaving Prop E to fail with 35 percent.

Ordinance F wouldn't have limited the number of clinics, but would have put in place tougher controls, such as audits and testing for pesticides and toxins. But it failed with only 40 percent of the vote.

It was also a good night for friends of Garcetti: Mitch O'Farrell, a former field deputy for the mayor-elect, defeated Public Works Commissioner John Choi for Garcetti's 13th District seat in the Hollywood area.

Since none of the candidates in the 6th district (San Fernando Valley) earned more than 50 percent, there will be a runoff vote on July 23 between former Assemblywoman Cindy Montanez and Los Angeles Unified School District board member Nury Martinez.