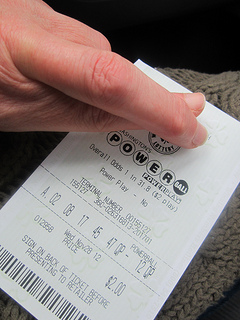 Photo by Upupa4me via Flickr
Argh, so close! One woman in Pasadena had all six winning Powerball numbers but couldn't claim any of the $360 million jackpot.

Margit Arrobio purchased five Powerball tickets at a local Shell gas station on the evening of May 15 and discovered the next morning that she had all the winning numbers, ABC News reports.

She was puzzled when Good Morning America reported that no winning ticket had been sold.

"I called my gas station where I bought the ticket and I said, 'I don't get it. I have every number and yet they say there's no winner,'" Arrobio said.

Only after the person at the gas station asked her what time she made the purchase did Arrobio realize she'd bought her ticket around 8 p.m., about an hour after the numbers had already been announced.

Arrobio's reaction: She was understandably "shocked and then disappointed." You can bet next time, she'll buy any lottery tickets well before the 7 p.m. cut-off.

With no (official) winning numbers, the Powerball jackpot skyrocketed to $590.5 million on the next draw, May 18. The only winning ticket to match all the numbers was sold to someone in Florida, although two lucky California buyers who matched five of the numbers won a not-shabby $2.3 million each. The winning California tickets were sold at 7-Elevens in Taft and in San Jose, said a California Lottery spokesperson.