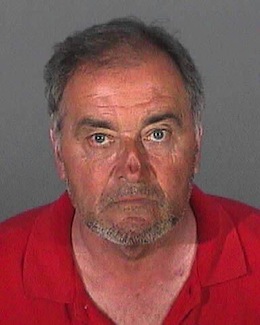 Juan Carlos Gutierrez (Booking photo courtesy LASD)
An instructional aide working at a local high school has been arrested and stands accused of fondling a teenage student in at least one encounter that was caught on surveillance video.

60-year-old Juan Carlos Gutierrez was arrested Friday on a warrant for three misdemeanor counts of Annoying or Molesting a Child, according to the Los Angeles County Sheriff's Department.

Gutierrez works as a teacher's aide at Leuzinger High School in Lawndale, which is part of the Centinela Valley Union High School District.

On May 7, 2013 the suspect accompanied the victim, a 16-year-old female described by law enforcement as mentally challenged, into a stairwell at the school where he fondled her over the clothing. The entire incident was captured on surveillance video, say authorities.

Students reported the "inappropriate touching" to the school principal, who contacted the LASD, who in turn launched an investigation.

Anyone with information about similar conduct by the suspect are asked to call the Special Victims Bureau at (877) 710-LASD (5273).

Gutierrez is still in custody and is being held in lieu of $60,000 bail. He is scheduled to appear in Torrance Court Tuesday.

Ed. note: An earlier version of this story included incorrect information provided by the LASD regarding suspect Gutierrez' current whereabouts, and has since been updated.