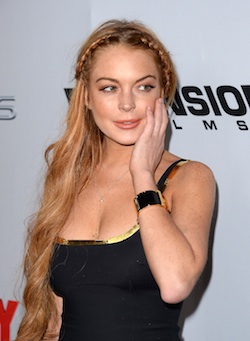 Lindsay Lohan arrives at the 'Scary Movie 5' premiere at the ArcLight Cinemas Cinerama Dome on April 11, 2013 (Photo by Jason Merritt/Getty Images)
Lindsay Lohan doesn't seem to have a big problem with sobering up from alcohol for 90 days: after all, she's been there before. But apparently the rehab veteran is freaking out now that the doctors at The Betty Ford Center refuse to allow her to take Adderall during her stay.

Lohan claims that she takes the drug because she suffers from ADHD, but the docs at the rehab facility say that they almost never treat people over the age of 15 with the drug because it is addictive, according to TMZ. (It doesn't help that Adderall has a reputation for being the drug of choice for weight-conscious Hollywood.)

Lohan is telling her friends that she wants to bust out of Betty Ford and find a facility that won't be so strict about her taking Adderall, TMZ reports. But the website says that it's unlikely that the judge would allow Lohan to move just because she disagreed with her doctors' medical advice.

UPDATE: Lohan could face time in jail if she tries to get out of her stint at the Betty Ford Center, according to Radar. A source told the website: "The judge overseeing Lindsay’s case has made it crystal clear that if she defies the agreement, it’s jail time."

And another source said that the starlet is on Adderall to keep her weight down, and she's terrified at the thought of gaining weight during her 90-day stay: "Lindsay is absolutely freaking out about the prospect of gaining weight now that Adderall has been taken away. Lindsay has been able to eat whatever she has wanted and not gain weight for years and she attributes this to Adderall."