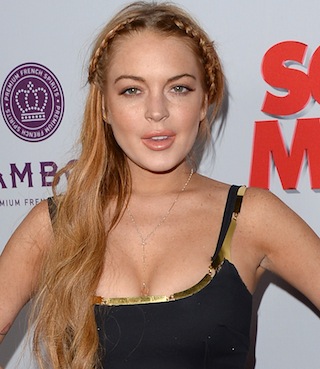 Actress Lindsay Lohan arrives at the Dimension Films' 'Scary Movie 5' premiere at the ArcLight Cinemas Cinerama Dome on April 11, 2013 in Hollywood, California. (Photo by Jason Merritt/Getty Images)
It's back to the old familiar for Lindsay Lohan, as the struggling actress has now entered the Betty Ford Center in the SoCal desert for treatment, and has re-hired attorney Shawn Holley to help keep her out of the pokey.

Lohan was supposed to enroll Thursday at a Newport Beach rehab facility as part of a plea deal arranged by her New York-based attorney Mark Heller. Even though Lohan had opted at the last minute to head to Orange County for treatment instead of a New York-area facility (supposedly so she could keep up her smoking habit) the starlet only spent a few minutes there Thursday, according to the L.A. Times.

One issue with the facility, Morningside Recovery, was that its legality was in question; TMZ reported that in "November, 2011 Morningside's license was suspended for being careless with prescription drugs and operating beyond the scope of its license. After a full hearing in 2012, the California Dept. of Alcohol and Drug Programs REVOKED Morningside's license outright."

Holley — a legal fairy godmother of sorts for Lohan — will try to keep the "Mean Girls" actress out of further trouble.

Also, Holley is licensed to practice law in California, unlike Heller, and doesn't have a habit of trying to make shady backroom deals or kissing up to judges in open court.

Thanks to all these changes, Lohan ended up checking into Betty Ford in Rancho Mirage late Thursday night. She'll be there for a 90-day stint. Like Holley, Betty Ford isn't strange territory for Lohan; she spent time there in 2010.