Sharon Osbourne Is 'Devastated' By Ozzy's Fall Off The Wagon 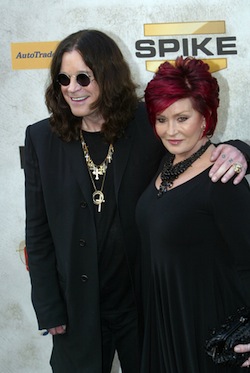 Sharon and Ozzy Osbourne (CarlaVanWagoner / Shutterstock.com)
Ozzy Osbourne recently revealed that he fell off the wagon over the past year and a half, returning to drinking an doing drugs as he recorded a new album with his band, Black Sabbath.

Amid that news were rumors that he and Sharon, his wife of 31 years, were splitting up. Ozzy put a quick kibosh on that, stating on Facebook that they were in fact very much together, but Sharon has now come out and said that she didn't realize how bad Ozzy's drinking and drug habit had gotten in this most recent relapse.

Speaking on "The Talk," where she is a co-host, Sharon said "I never knew he was using prescription drugs...I knew he was drinking occasionally but I didn't realize the extent," according to People.

She noted that they are indeed not getting divorced, but that she's still very upset by these recent developments.

"We're not getting divorced. However, am I happy? No. Am I upset? Yes I am. I'm devastated right now."

Both of the Osbourne's children — Jack and Kelly — posted tweets addressing the rumors about their parents splitting up. On April 14, Jack tweeted:

...it's all bullshit. Last time I check a lot of British news papers weren't amazing sources of accurate information. Moving on...

If i read 1 more bullshit story about my mother and father Im going to lose my mind!!!! #EnoughAlready

Meanwhile, Jack is also faring better when it comes to staying on the wagon, celebrating ten years of sobriety today. He posted on his Twitter account:

Well I never thought this was gonna happen 10 years ago. twitter.com/MrJackO/status…