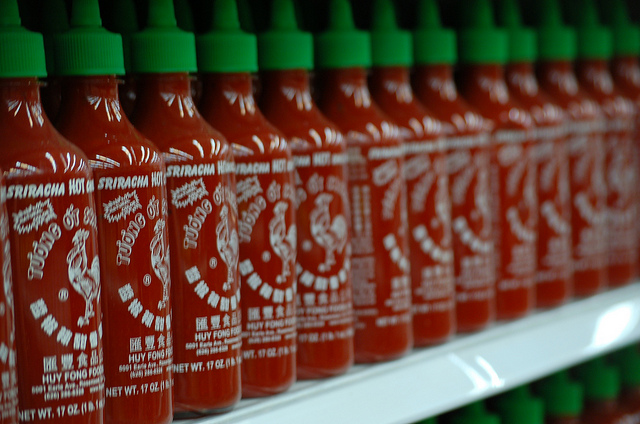 Sriracha hot sauce has gained a cult following with foodies over the years, and there's nary a pho joint out there without a bottle of the stuff on their tables. In case you've ever wondered who the master behind the cock sauce is, it's not some young gun with a degree in marketing. It's a 68-year-old man named David Tran, who founded hot sauce company Huy Fong Foods Inc. in Chinatown in 1980.

Since then, the company has moved to Rosemead and will soon relocate to a larger packing plant in Irwindale. They've sold more than $60 million worth of sauce last year alone, according to the L.A. Times.

That's not to say they haven't been a few bumps along the way, like in 2007 where they had such a high demand for their product that Tran literally could not find enough of the right chlies to make the sauce. So he asked his customers to wait instead of using an inferior product, and wait they did.

It's that integrity that's carried the company through the recession, and into its current state of zeitgeist-y success.

The business profile in the L.A. Times elaborates on the company's unique and inspiring history:

When North Vietnam's communists took power in South Vietnam, Tran, a major in the South Vietnamese army, fled with his family to the U.S. After settling in Los Angeles, Tran couldn't find a job — or a hot sauce to his liking.

So he made his own by hand in a bucket, bottled it and drove it to customers in a van. He named his company Huy Fong Foods after the Taiwanese freighter that carried him out of Vietnam.

Tran was determined to bring the heat, as he still is.

"Hot sauce must be hot. If you don't like it hot, use less," he said to the Times. "We don't make mayonnaise here."