Restaurants can sometimes open and close within what seems like the blink of an eye, only to be replaced by something else as fleeting. In a city that is constantly fighting its own reputation as having no history, when it comes to restaurants that withstand the test of time, we have an impressive slate of venerable veteran dining spots. From the birthplace of a sandwich classic (and the rivalry that came with it) to longtime celebrity hideaways and a few places for plates of meat and stiff drinks in between, we've got our picks for the best classic restaurants in L.A. 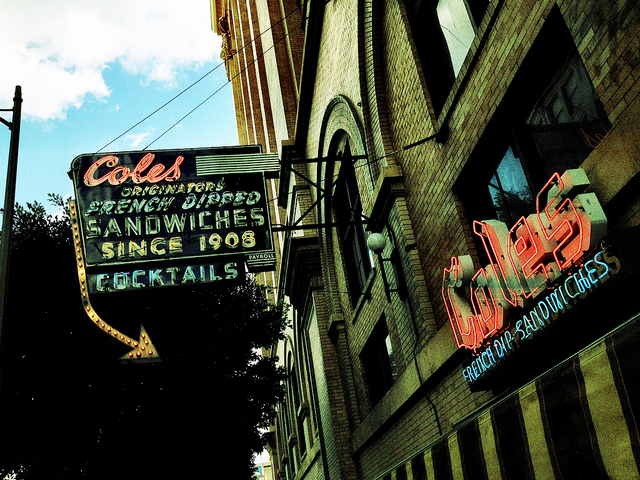 Cole's has been open since 1908 (Photo by Hank Chinaski L.A. via the LAist Featured Photos pool on Flickr

Cole's (1908)
Los Angeles is the home of the French Dip sandwich, but its origins come with a bit of a food feud. Contender number one (at least alphabetically) is Cole's. L.A.'s oldest public house, on the ground floor of the Pacific Electric Building opened in 1908, lays claim to the stake on the French Dip legacy. For the uninitiated, it's a hot sliced roast beef sandwich on a French baguette served "wet" with au jus from the meat. They're still serving up French Dips (with choice of meat) at Cole's, along with sides like slaw and fries, and treats like Bourbon Pecan pie. You can get a great cocktail at Cole's (or slip into the backroom "speakeasy" The Varnish), too. Serving 99 continuous years, Cole's shut down for a big remodel in 2007 and re-opened in late 2008. Cole's was designated a Los Angeles Historic-Cultural Monument in 1989.

Philippe's The Original (1908)
Considered a rival of Cole's for over a century now, Philippe's is the other contender in the French Dip creation wars, though their timeline would suggest (sorry Philippe's) that Cole's came first. Philippe's was established in 1908 by Philippe Mathieu, who is said to have "accidentally" invented the French Dip in 1918 when he "inadvertently dropped the sliced french roll into the roasting pan filled with juice still hot from the oven." The customer was a fan, and the sandwich went on the menu, says legend. Hunker down for some old style (and affordable) comfort here, where you order at the counter and sit down at communal tables atop sawdust-strewn floors. Don't forget to slather Philippe's signature mustard on your sandwich. Not in the mood for a sandwich? Give their great breakfasts a try. 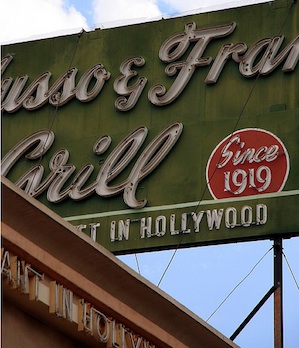 Photo by atomicshakespeares via the LAist Featured Photos pool on Flickr
Musso & Frank Grill (1919)
Hollywood, frankly, wouldn't be Hollywood without Musso & Frank's. This dimly-lit hideaway on the Boulevard has been serving up martinis and steak dinners to execs, scribes, and stars for almost 100 years now, and counting. Indulge in a classic menu of chops and roasts in their worn leather booths, or sidle up to the mahogany bar for a stiff drink. Also on the menu are their Flannel Cakes, which are a lighter, slightly sweeter version of a pancake, in case you want to sign your contract for impending fame over something other than a lamb chop.

Pacific Dining Car (1921)
How about having a meal inside a railway train car? That was the basis of the idea behind the Pacific Dining Car, when Fred and Grace "Lovey" Cook opened up their restaurant in L.A. in 1921. The restaurant still stands in its original spot today, where diners can enjoy a meat-centric menu of aged beef, like their Baseball Steak or Cowboy Steak along with savory sides. Lovey herself stayed hands-on until 1960, when the next generation of owners took over—her daughter Virginia and her husband Wes Idol. Among the PDC's unique features is the fact that their two locations serve 24 hours, making them the only fine dining restaurant in L.A. to do so. Breakfast specialities include sumptuous egg dishes like the Eggs Blackstone, rich Lyonnaise potatoes, and, of course, steak-and-egg dishes.

Tam O'Shanter Inn (1922)
A little fact with your meal: Tam O'Shanter is Los Angeles' oldest restaurant operated by the same family in the same location, and it also happens to be a legacy tied to local food legend. It was opened in 1922 by Lawrence Frank and Walter Van de Kamp, founders of Van de Kamp's Holland Dutch Bakeries, who went on a few years later to open up another old school L.A. favorite, Lawry's The Prime Rib. While Tam O'Shanter is known for their annual Robbie Burns Night festivities (and was briefly re-dubbed Great Scot in the late 1960s before reverted back to its original moniker), this is where you'll want to warm up with a hot toddy by the fire, have some eats from their Ale & Sandwich Bar, and see if your Scottish lineage is repped by the tartans on display. 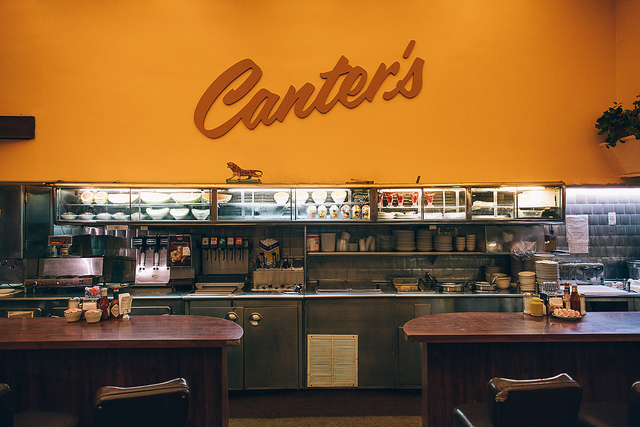 Photo by Glark via the LAist Featured Photos pool on Flickr

Canter's Delicatessen (1931)
You haven't lived in L.A. until you've stumbled into Canter's bleary-eyed at an ungodly hour and stuffed your face with one of their classic deli sandwiches or plates of golden-fried potato pancakes or steaming bowls of Matzoh ball soup (aka Jewish penicillin). One of the city's quintessential Jewish delis, this family-owned business is known for its never changing decor, cocktailing Kibitz Room, ample pastry cases, and a menu of deli comfort classics. Although the current generation in charge has been infusing the old familiar roster of corned beef and pastrami sandwiches with contemporary items like panini, burgers, and (gasp!) bacon, you can still get your Reubens and Brooklyn Aves piled high the way you want 'em any hour of the day. 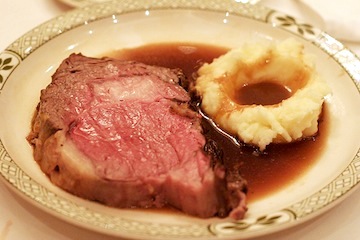 Prime Rib at Lawry's (Photo by vixyao via Flickr)
Lawry's The Prime Rib (1938)
Lawry's is pure L.A. legacy that has grown into a national empire of seasonings and traditional dining. Lawry's The Prime Rib restaurant debuted in Beverly Hills in 1938, and remains a favorite destination for locals and tourists alike. Celebrating their 75th anniversary this year, Lawry's remains the ultimate place to go in L.A. for a plate of succulent prime rib, paired with their signature "spinning salad" and sides like Yorkshire Pudding and creamed spinach. This dinner-only "Restaurant Row" eatery still asks that you show up in proper attire, making this one place where our laid-back Cali casual takes a well-deserved break for an elegant meal.

The Polo Lounge at the Beverly Hills Hotel (1941)
The stars have long convened for comestibles at the posh Polo Lounge at the Beverly Hills Hotel. A storied hideout for the rich and famous, the hotel celebrated its centennial in 2012, however the Polo Lounge is a younger dame, dating back to 1941. Named for Will Rogers, Walt Disney, Darryl Zanuck, and other Hollywood heavyweights who played polo matches in nearby fields, the restaurant is a beloved spot for dealmakers, stars, and ordinary folk in search of a delectable brunch, afternoon tea, lunch or dinner with musical accompaniment, and of course, the L.A. power breakfast. 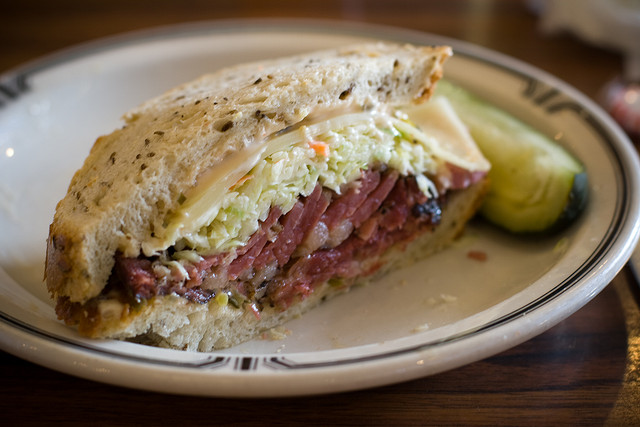 Langer's Delicatessen (1947)
Langer's first opened on June 17, 1947, as a 12-stool luncheonette, and it's been at the same location the whole time. Langer’s has served more than 4 million pounds of pastrami since its inception, and pastrami is the most popular meat they serve, and the #19 the most popular sandwich on the menu. What's the #19? It's hand-cut hot pastrami, cole slaw, Russian dressing, and Swiss cheese, served on double-baked Rye bread. Langer's is one of L.A's enduring Jewish delis, and many attest their pastrami sandwiches are the best in the city...or even America.

Dal Rae (1952)
Head out to Pico Rivera and settle into your booth surrounded by warm paneling and take a trip back in time to the 1950s at Dal Rae. Feed your appetite for nostalgia with dishes prepped table side, like Caesar salad, Steak Diane, and Chateaubriand for two. Dal Rae is where you can get throwback classics like Lobster Thermidor, frogs legs, and sauteed calves liver. Save room for dessert and more showmanship; their sweet treats selection includes several traditional cakes and ice creams, but also more table side flair, like Bananas Flambé, Cherries Jubilee, and Grand Mariner Supreme. 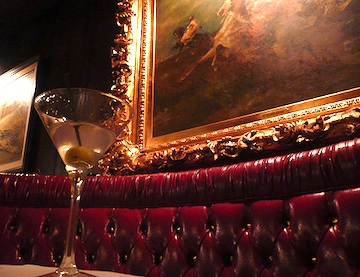 A martini at Taylor's (Photo by jericl cat via the LAist Featured Photos pool on Flickr)
Taylor's Steak House (1953)
You want a stiff drink, a shrimp cocktail, and a steak? Taylor's is one of the ideal spots in L.A. to do it right, old school steakhouse-style. Taylor's as we know it began as Taylor's Tavern (the "Biggest Little Bar in Los Angeles") not too far from where they've been in K-town since 1970, with a second location in La Cañada operating since 1996. Taylor's is steakhouse simplicity at its best, where you can get special occasion steaks, like the Culotte (the most tender cut of the Top Sirloin) or the bone-in Kansas City Ribeye. While this can be a serious splurge if you opt to do it up, you can also dial it back by checking them out at lunchtime, selecting a daily special, or going for a more modest steak sandwich.

Yamashiro (1960)
An iconic property hovering watch over Hollywood for almost a century, the Japanese restaurant on the hill has been a dining destination for over five decades now. What was once a private estate has gone through many changes and purposes over its storied (and haunted) history, however it remains a cherished spot for special occasions, thanks to its stunning, sparkling vistas of the city and its cozy, often romantic atmosphere perfect for proposals or celebrations. Under the skilled hands of Executive Chef Brock Kleweno, the Yamashiro menu has also evolved to embrace an Asian-influenced assemblage of sushi rolls, small plates, and entrees. Pair up your meal with a Mai Tai from the bar or a selection from their incredible sake menu, and save room for dessert...get the donuts. 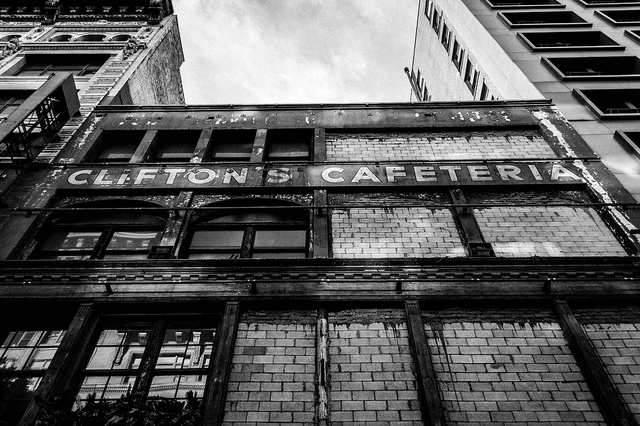 Photo by Chirgboy2012 via the LAist Featured Photos pool on Flickr

Clifton's Cafeteria (1935)
While L.A. awaits the rebirth of Clifton's Cafeteria, the casual eatery is an irrefutable part of the city's culinary history. Of the once-extensive chain of cafeterias, Clifton's Brookdale remains the only operational location, opened in 1935, and soon to be reinvented as a 24-hour food and drink destination in the revitalized Broadway area. We've got the whole Clifton's story here for you to chew on in the meantime.

Pink's Hot Dogs (1939)
We'd be remiss to not give a nod to the enduring Pink's Hot Dogs and their constant lines of devoted diners who queue up to load their trays (and arteries) with meaty (and veg-friendly!) treats and fried sides year after year. The family-owned stand is L.A. fast food royalty, and began as a humble corner pushcart before becoming the celeb-endorsed meal destination we know it as now.

Thanks to LAist intern Diego Renteria for research assistance for this post.